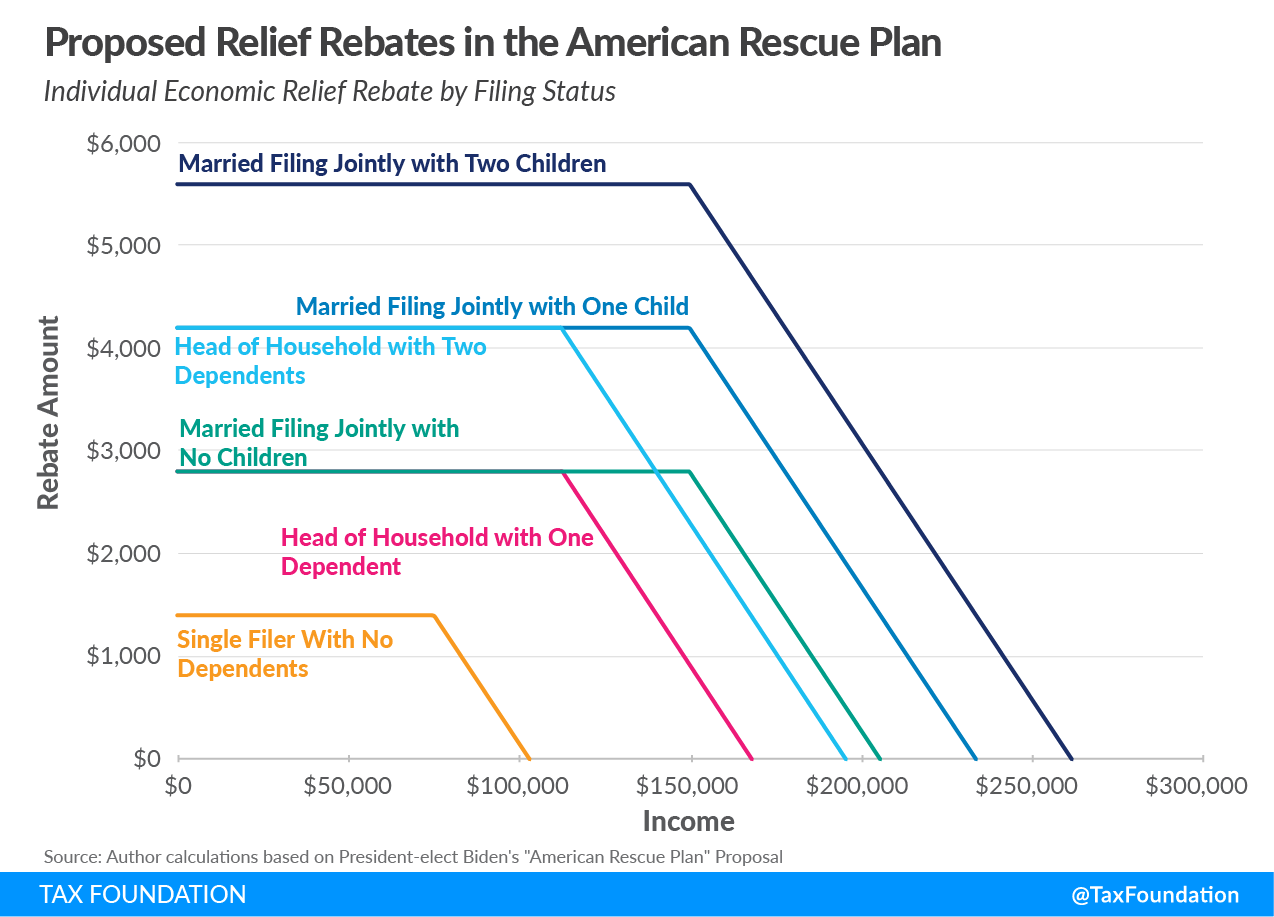 In releasing details of his coronavirus relief plan Thursday evening, President-elect Joe Biden envisions a two-part response to the pandemic and economic crisis. The first aspect builds on previous rounds of relief enacted in 2020, and would provide larger payments to individuals, expanded relief for households and small businesses, funding for vaccine distribution, and aid to state and local governments. In all, the first aspect—called the American Rescue Plan—contains about $1.9 trillion in relief.

The second aspect goes beyond targeted relief measures toward recovery, including infrastructure, green energy, health care, and education initiatives. It will focus on the longer-term recovery and be detailed later this year.

To start, individuals would receive an additional $1,400 direct payment, topping off the $600 passed as part of the Consolidated Appropriations Act of 2021 (CCA21) in December 2020, for a combined $2,000 per individual. It would include qualifying adult dependents and households with mixed immigration status.

The Joint Committee on Taxation (JCT) estimated that providing a $1,400 payment on top of the $600 payment would reduce federal revenue by about $463 billion.

Next, the plan would significantly expand the child tax credit (CTC). The credit currently provides $2,000 for qualifying child dependents under the age of 17. Up to $1,400 of the credit can be received as a refund in cases where the credit is worth more than a person owes in tax. The refundable portion is phased in as a person earns income.

For 2021, Biden would increase the credit in three ways: for children under 6, the new max would be $3,600; $3,000 for children ages 6 to 17; and the full amount of the credit would be refundable and not subject to an income-based phase-in. The CTC expansion will reduce federal revenue by $104 billion in 2021, according to the Tax Foundation General Equilibrium Model. 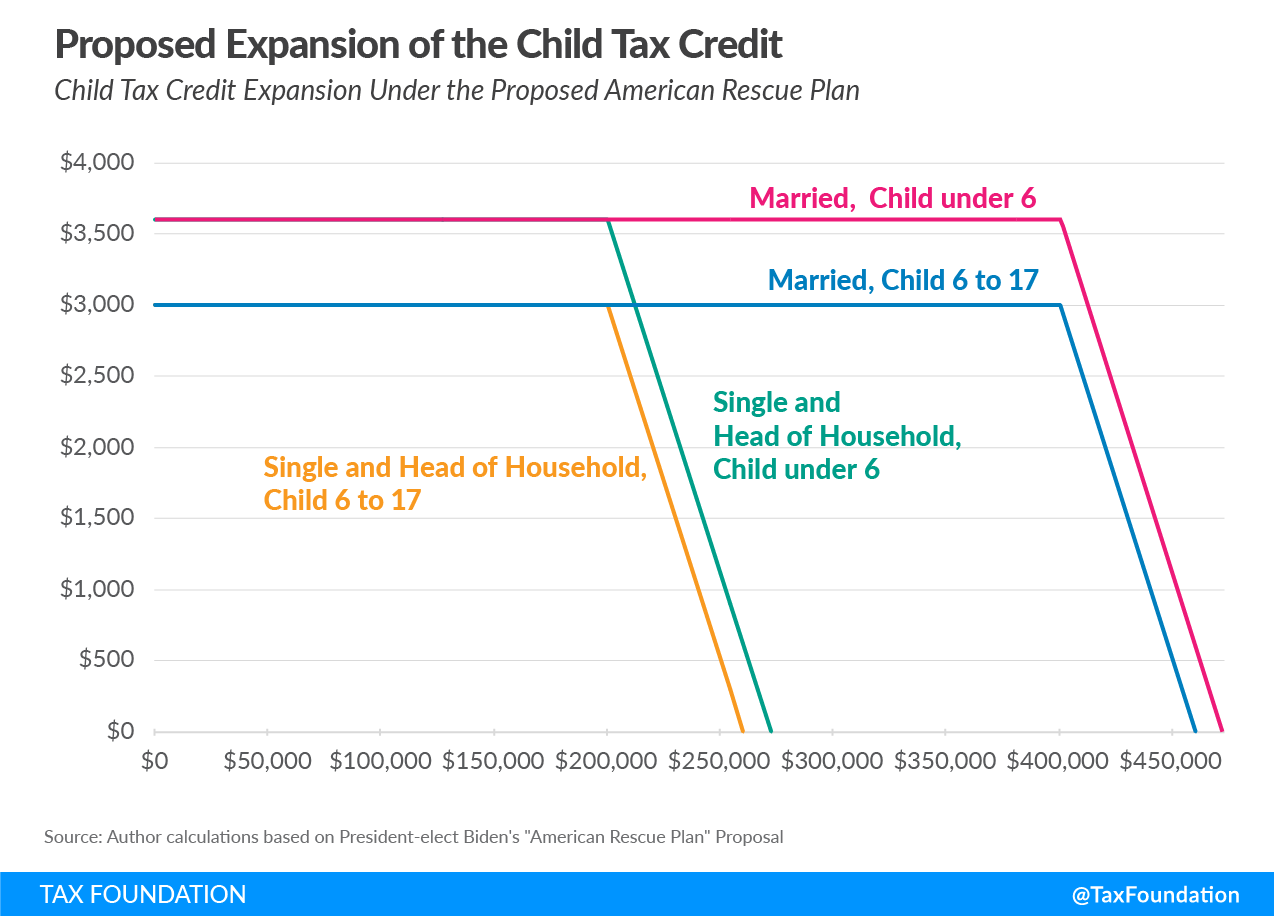 Biden would expand the Earned Income Tax Credit (EITC) for 2021 only. The plan would raise the maximum credit for adults without children from $530 to nearly $1,500 and raise the income limit for the credit from $16,000 to about $21,000. Workers over the age of 65 could claim the credit. JCT scored a nearly identical change in the HEROES Act proposal at about $10.1 billion in 2021. 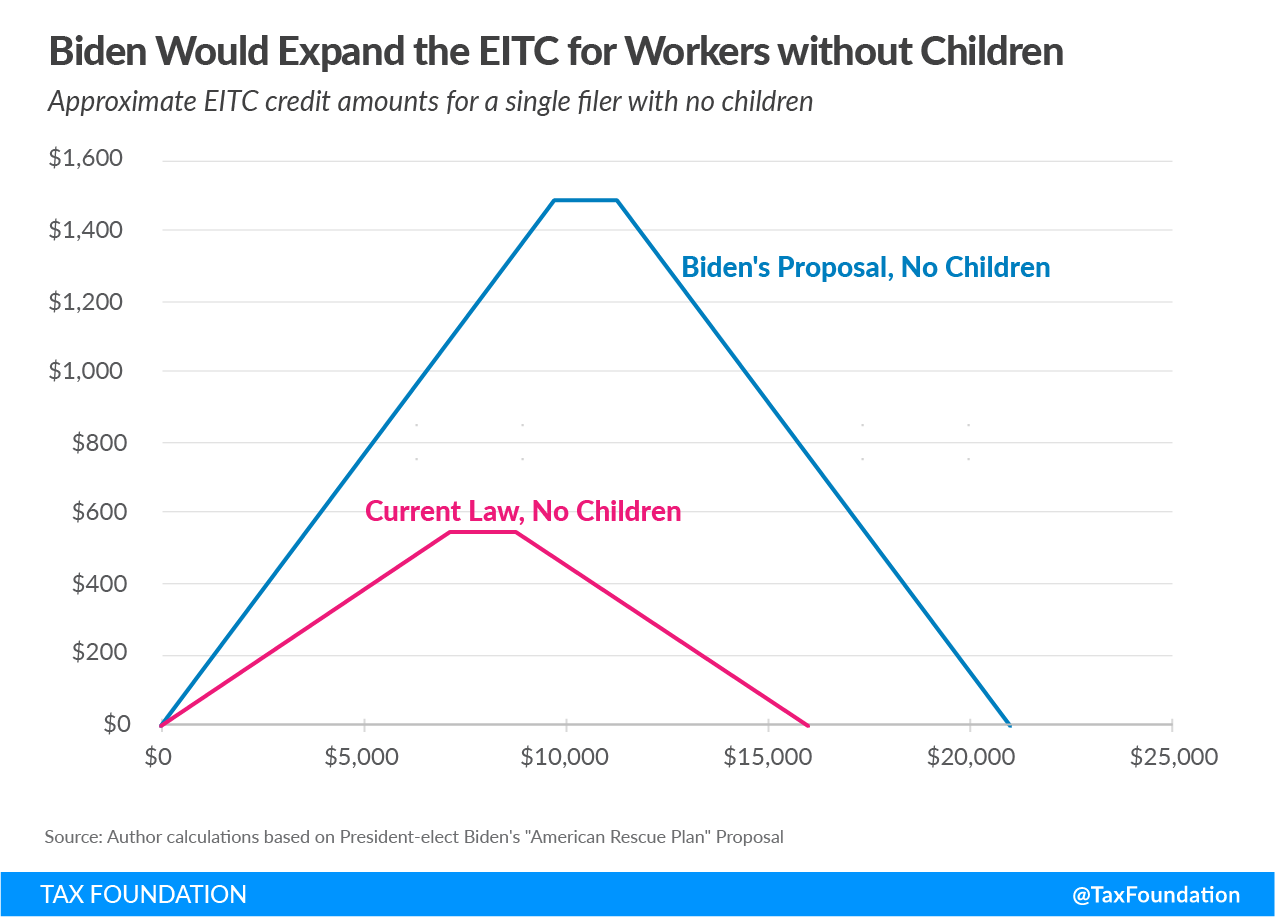 Under Biden’s plan, FPUC would be increased from $300 to $400 and he calls for additional weeks of PEUC. Workers would qualify for the expanded federal benefits through September 2021. The plan would also fully fund state short-term compensation programs and additional weeks of benefits.

As our colleague Jared Walczak points out here, collections data indicate state tax revenues are down only slightly overall but states that depend heavily on tourism or the energy sector are disproportionately struggling.

The plan also includes $160 billion for vaccine distribution, an expansion of testing, and support to reduce critical supply shortages. The Federal Medicaid Assistance Program (FMAP) would rise to 100 percent coverage for the administration of vaccines. The plan further supports health coverage by subsidizing continuation health coverage (COBRA) for those who lose their employer-sponsored health insurance through September 30, 2021. It would increase the value of the Premium Tax Credit used on individual health insurance exchanges to ensure individuals pay no more than 8.5 percent of income for health insurance coverage.

The plan provides $170 billion to support school reopening and funding for post-secondary education and $25 billion in support of childcare providers.

Renters and small landlords would receive $30 billion of support. The eviction and foreclosure moratorium and continued forbearance for federally guaranteed mortgages would be extended through September 30, 2021.

The plan would expand and strengthen paid sick and family medical leave through September 30, 2021, for workers who need to quarantine, provide care to family members with COVID-19, or take care of children when daycare or schools are closed. Expanded leave would include a maximum paid leave benefit of $1,400 per week for eligible workers, up to a full wage replacement of up to $73,000 annually.

Biden calls on Congress to require employers to provide such leave policies and eliminate exemptions that existed under the first round of paid sick and family leave. Additionally, he proposes extending the refundable tax credit for leave to cover 100 percent of the cost for employers with less than 500 employees and reimbursing state and local governments.

The 15 percent benefit increase for the Supplemental Nutrition Assistance Program (SNAP) provided in December for the first six months of 2021 would be extended through September 2021 to reduce food insecurity through the year. The extended benefit would also be paired with a temporary reduction in the state match for SNAP and $3 billion for the Special Supplemental Nutrition Program for Women, Infants, and Children (WIC). The plan also allocates $1 billion to Temporary Assistance for Needy Families (TANF).

The recovery plan details are currently lighter than the relief plan, with more information to be provided in the coming weeks. Initiatives would include infrastructure, clean energy projects, and spending on health care and education. It is likely that the recovery plan would include revenue offsets to help pay for the various programs. Some of the revenue offsets up for discussion are a corporate tax rate increase or higher taxes on high-income earners.

The type of spending and the financing method matter for the potential benefit or harm to the economy. For instance, infrastructure investment will have a return, but that return is likely lower than the expected rate of return for private investments. And the financing method can further reduce that return. Increasing the corporate income tax, even to fund productivity-enhancing infrastructure, has a negative impact on the economy. Offsetting the cost of federal government investments with discretionary spending cuts, or pursuing policies to encourage private sector investment, would likely have a bigger bang for the buck.

The combined relief and recovery plan proposed by President-elect Biden would be larger than the $935 billion relief package included in the CCA21 and rival the $2.2 trillion CARES Act enacted in March 2020. The American Rescue Plan alone will cost an estimated $1.9 trillion, bringing the total amount of relief over the past year to exceed $5 trillion.

Further measured fiscal support can help people weather the ongoing pandemic and its economic effects. Policymakers should continue to work toward simple and efficient relief measures that are consistent with long-term objectives and cost-benefit analysis.