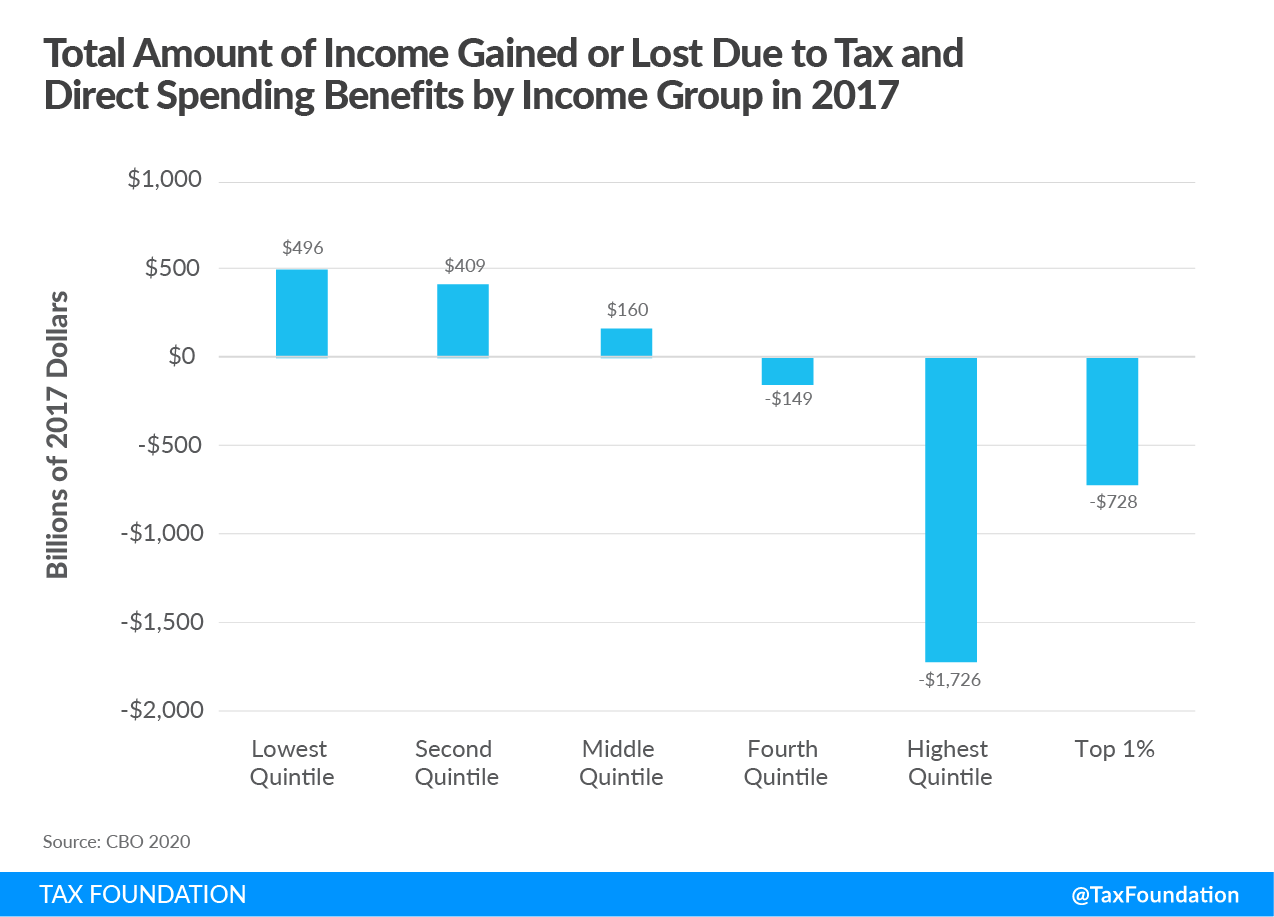 President Joe Biden has laid out an ambitious policy agenda that includes increased spending on such programs as childcare, infrastructure, health care, and climate change. The Committee for a Responsible Federal Budget estimates that these new programs total more than $10 trillion[1] over the next decade. Biden has proposed to offset this new spending with higher taxes on the wealthy and corporations, which the Tax Foundation estimates would raise $3.3 trillion[2] over the next decade.

Taken together, Biden’s spending and tax plans would clearly make the federal fiscal system more progressive and redistributive by increasing the tax burden on high-income taxpayers and channeling those revenues to households down the income scale.

Another factor which will spark a debate over the progressivity of the federal system is the soaring budget deficits generated by the extraordinary relief measures needed to deal with the COVID-19 pandemic. It is uncertain whether additional relief measures will be needed in 2021, but the question of where to find new tax revenues to reduce the mounting national debt will certainly be a backdrop to those discussions.

What is often missing from these policy decisions is a benchmark for how progressive and redistributive the current federal fiscal system already is—both spending and taxes. A recent study by the Congressional Budget Office, The Distribution of Household Income, 2017,[3] fills this information gap.[4]

The goal of the CBO study is to estimate how much federal fiscal policy—both taxes and direct federal benefits—impacts household incomes. The report provides estimates of how much households in various income groups benefited in 2017 from social insurance programs (such as Social Security and Medicare) as well as means-tested transfer programs (such as Medicaid, SNAP, and Supplemental Security Income), and contrasts these benefits with estimates of how much these households paid in total federal taxes.

To be sure, households do benefit from other federal programs such as national defense, highways spending, and public education, but CBO does not include the benefits of such programs in this exercise. The study is solely focused on fiscal policy that directly impacts household incomes.

Table 1 illustrates, from left to right, how direct benefit programs and federal taxes can either raise market incomes or reduce them. For example, in 2017, households in the lowest quintile had an average market income of $15,900. They received an average of $5,400 in social insurance benefits and $14,900 in means-tested transfers. They paid an average of just $300 in total federal taxes. Netting the taxes paid from the benefits they received added $20,000 to their market income, raising their income to $35,900. Thus, the net impact of federal fiscal policy raised their income by 126 percent.

The story changes completely for average households in the top two quintiles. On average, they paid considerably more in taxes in 2017 than they received in direct federal benefits. Households in the highest quintile, for example, had an average market income of $298,200. However, they paid $80,600 in total federal taxes which, after netting out their average direct benefits, reduced their income by $68,400, or 23 percent.

At the very top end of the income scale, the story is even more dramatic. Households in the top 1 percent paid an average of $606,900 more in federal taxes than they received in direct benefits. This reduced their average incomes by 31 percent, to $1.343 million from $1.950 million. While there is a common public belief that the rich don’t pay their fair share, these figures indicate that federal policy is quite progressive by reducing the incomes of the top 1 percent of households by nearly one-third.

The latter result may be the most notable since so much policy has been aimed at helping the middle class over the past few decades. It would appear that these policies have worked to both lessen their tax burden while delivering direct benefits to them.

According to the CBO report, each quintile has roughly 25 million households, which means that these average results for households can add up to billions of dollars in income gains or losses for these larger income groups. Figure 1 shows the total amount of income gained or lost due to tax and direct federal spending policies for the five quintiles plus the top 1 percent of households.

On the other end of the income scale, we can see that the progressive federal tax code did what it is intended to do, redistribute income from upper-income households. Overall, fiscal policy reduced the incomes of households in the fourth quintile by nearly $150 billion in 2017. However, this is a fraction of the more than $1.7 trillion that households in the highest quintile saw their incomes drop due to federal fiscal policy. Of this amount, some $728 billion came from households in the top 1 percent alone.

Overall, federal fiscal policy lowered the incomes of the top 40 percent of American households by nearly $1.9 trillion in 2017. Of this, more than $1 trillion was redistributed to lift the incomes of households in the bottom 60 percent of the population, while the remaining $900 billion went to pay for other federal spending.

A Historical Perspective on How Federal Fiscal Policy Has Changed Incomes

The CBO report provides data on household income and taxes from 1979 through 2017 to give us a historical perspective on the changing progressivity of the federal fiscal system—taxes and direct benefits. There are many ways to judge the progressivity of federal tax and spending policy, such as calculating effective tax rates or what CBO calls means-tested transfer rates, all of which indicate an increasingly progressive federal fiscal system. If we measure progressivity by the inflation-adjusted amount by which fiscal policy raises incomes for households in the lowest quintile and lowers incomes for those in the highest quintile, then 2017 was the most progressive year in the past four decades.

Figure 2 paints an interesting picture of the increasing progressivity of the federal tax and direct benefit system since 1979. The CBO adjusted the data series to 2017 dollars to allow for an apples-to-apples comparison over the decades.

The first thing to notice, and this should be no surprise, is that since 1979, households in the lowest quintile and the second quintile have received more in direct benefits than they paid in taxes. What is not shown here but is found in Table 7 of the CBO’s supplemental data to the report[5] is that tax policy was a large factor in this trend, especially since the mid-1990s.

Successive expansions of the Earned Income Tax Credit and creation of the Child Tax Credit dramatically reduced the income tax liabilities for these low-income households. Indeed, the doubling of the Child Tax Credit to $1,000 from $500 in the 2001 tax bill, combined with making the credit partially refundable, fully eliminated the income tax liability for households in the second quintile and gave them a large tax subsidy. 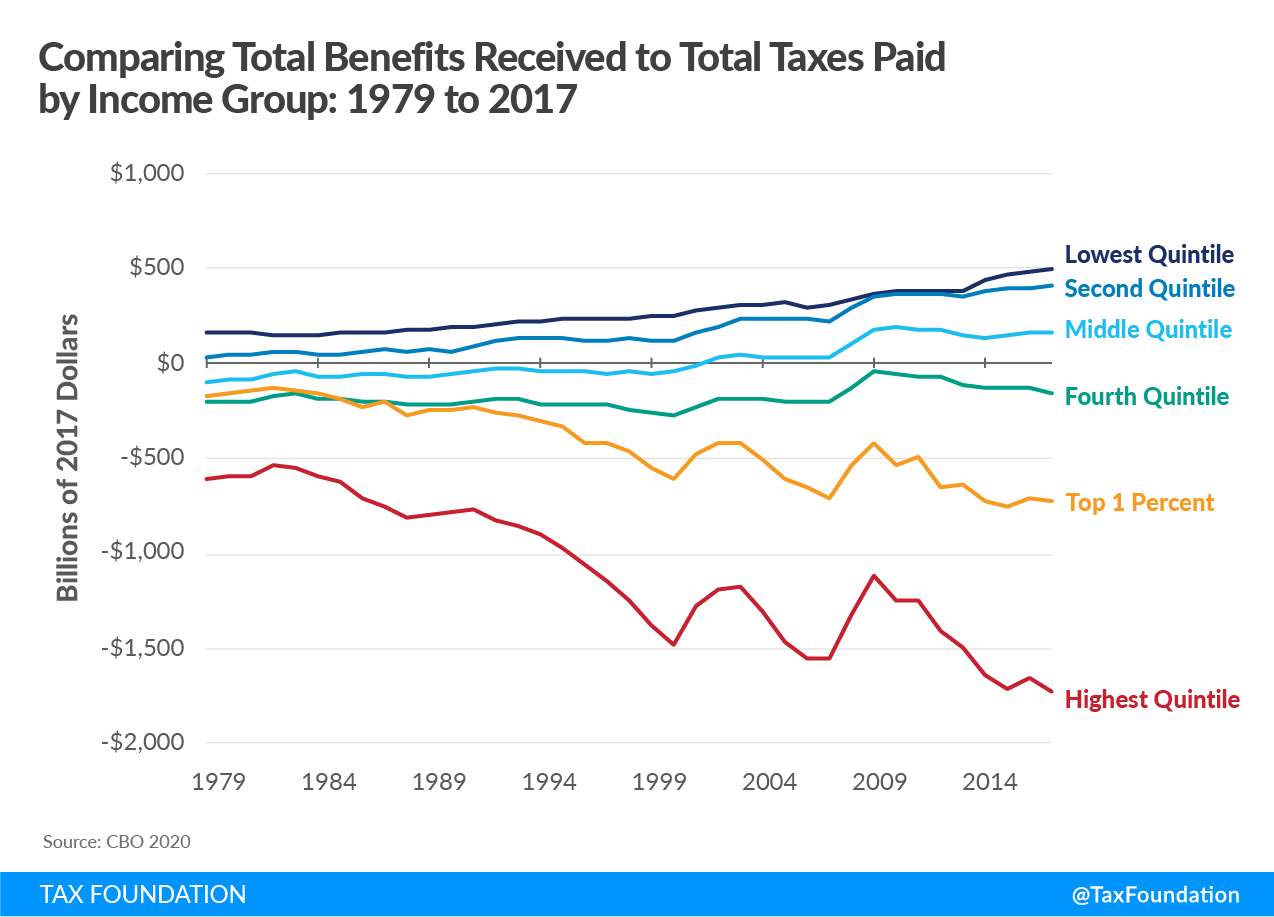 However, the more significant story is the changing fortunes of households in the middle quintile. These households also benefited substantially from the expansion of tax credits, and we can see that beginning in 2002—following the doubling of the Child Tax Credit—they became net beneficiaries from federal fiscal policy rather than net contributors. Thus, the gap between the amount of federal direct benefits the middle quintile received and the federal taxes they paid grew over the succeeding 15 years.

We should also note that the gap has been closing in recent years for the fourth quintile as well, yet another indication that the burden of the fiscal system is resting more and more on households in the highest quintile.

The most obvious trend in Figure 2 is the downward slope representing the increased fiscal burden on households in the highest quintile and, more recently, those in the top 1 percent. In 1979, the fiscal system lowered the aggregate income of households in the highest quintile by $609 billion, in constant 2017 dollars. By 2000, the amount of their reduced earnings had more than doubled to $1.4 trillion, then grew to a historical high of $1.7 trillion by 2017.

The top 1 percent of households has also seen their contributions to the fiscal system climb dramatically over the past four decades. In 1979, the fiscal system reduced their aggregate incomes by $175 billion in 2017 dollars. By 2000, that amount had more than tripled to $602 billion, and grown to $728 billion by 2017.

The CBO’s findings provide some needed perspective for the upcoming tax and spending debates that will soon dominate 2021. As lawmakers consider Biden’s policy agenda or another round of COVID-19 relief measures, it is also important for them to have benchmark figures on how progressive the tax and federal direct benefit system currently is. Some may argue the system is too progressive while others may say it is not progressive enough. But the CBO’s data clearly shows that the system is doing what a progressive system is intended to do—raise the incomes of the poor and middle class while reducing the incomes of upper-income households.

[1] Committee for a Responsible Federal Budget, “The Cost of the Trump and Biden Campaign Plans,” Oct. 7, 2020, http://www.crfb.org/papers/cost-trump-and-biden-campaign-plans.