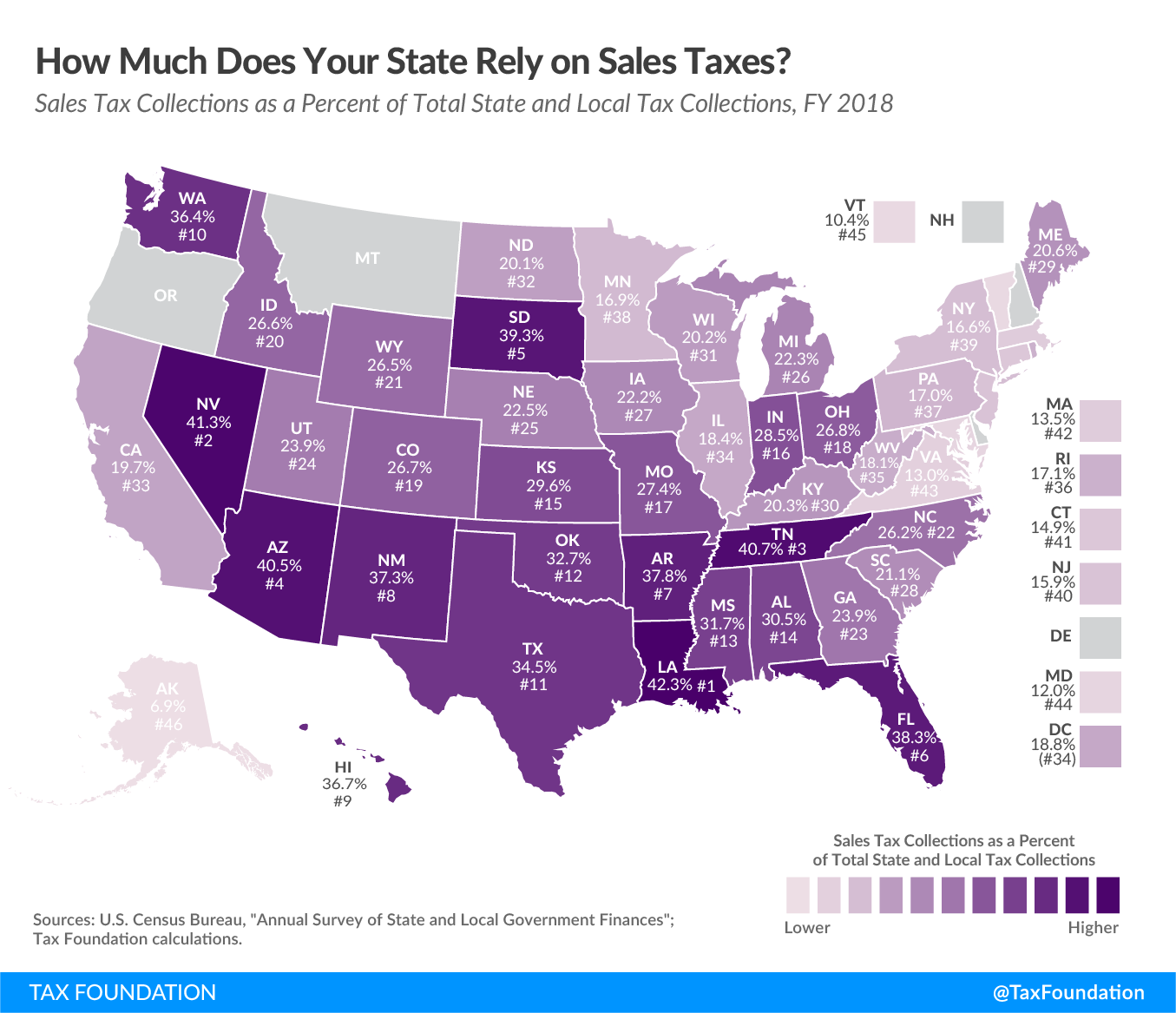 This week’s map continues our look at state revenue sources, this time focusing on revenue collected through the general sales tax.

Consumption taxes (like sales taxes) are more economically neutral than taxes on capital and income because they target only current consumption. Income taxes fall on both present and future consumption, thus partially acting as a tax on investment by capturing savings.

Consumption taxes are generally more stable than income taxes in economic downturns as well. Although there was an initial drop in consumption during the coronavirus crisis, sales tax revenues have bounced back as many stores have reopened, and as people have moved much of their shopping online.

Today’s map compares the extent to which sales taxes are responsible for tax revenue generation in each state. Louisiana is the most reliant on sales tax revenue, with 42.3 percent of tax collections attributable to sales taxes. Nevada, which does not have an income tax, comes in second with 41.3 percent of state and local tax collections. Tennessee, which does not tax wage income and fully phased out its investment income tax this year, is next with 40.8 percent, followed by Arizona at 40.5 percent.

Although Nevada, Tennessee, and South Dakota (39.3 percent) all rely heavily on the sales tax, they are not high-tax states. All three states forgo an individual income tax and choose to raise a large portion of their revenue through the sales tax instead. South Dakota additionally forgoes corporate income taxes. Wyoming does not levy individual or corporate income taxes either but lands near the middle of the pack (26.5 percent) in terms of sales tax reliance due to its heavy reliance on severance tax collections. This trade-off between income and sales can be a good thing, as it allows states to avoid relying on the less economically neutral individual income tax.

Many factors can affect sales tax reliance. States and localities that border low-sales tax or no-sales tax jurisdictions often struggle to levy sales taxes with high rates, as these could prompt consumers to shop across the border.

Another consideration is the tax base, the transactions that are subject to the sales tax. The most neutral form of sales tax would fall on final consumption of both goods and services at a low rate, while exempting business inputs. In practice, though, many states fall short of this ideal due to historical accident or policy decisions to exempt certain classes of goods.

Note: This is part of a map series in which we examine the primary sources of state and local tax collections