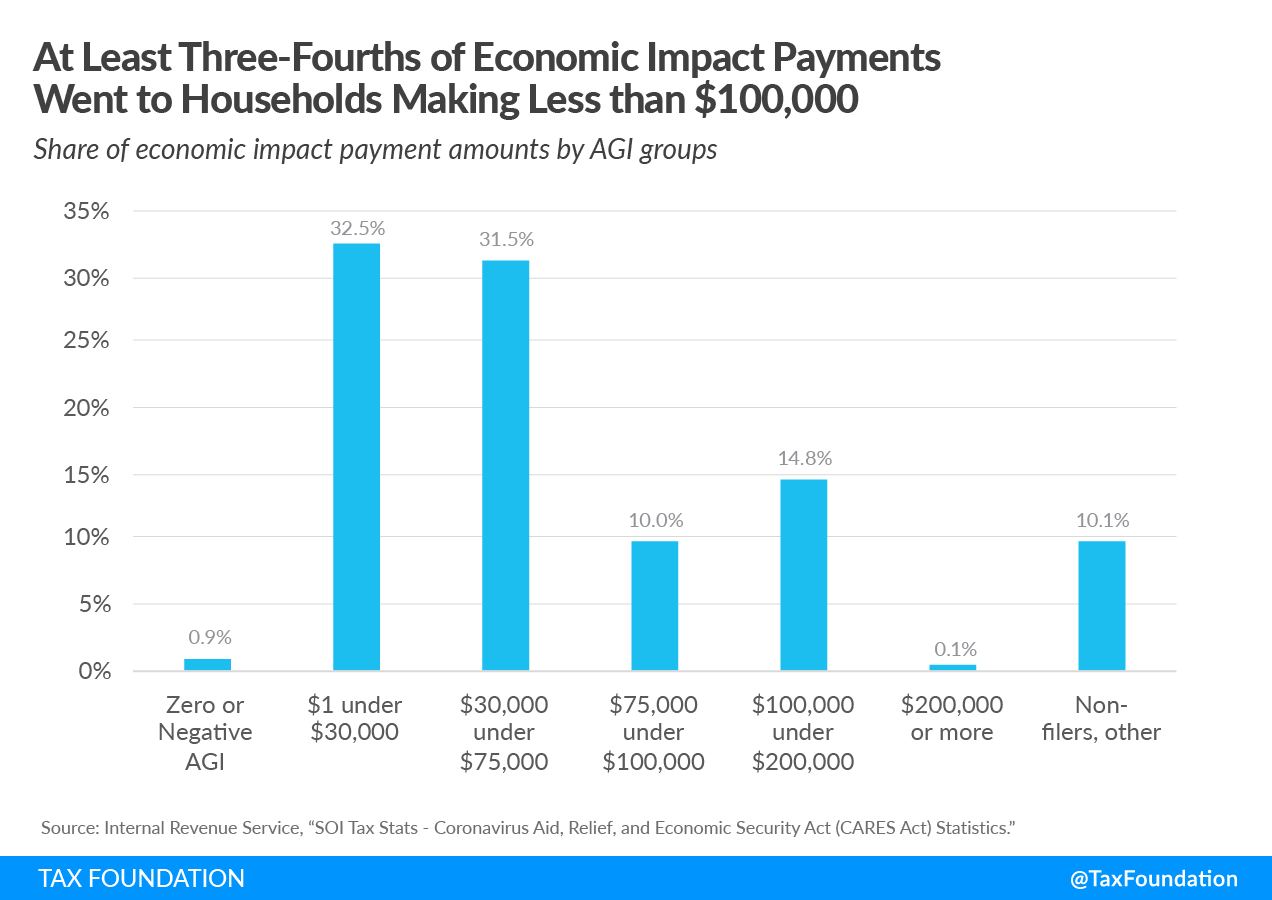 Newly published data from the Internal Revenue Service (IRS) shows that the first round of economic impact payments primarily benefited households earning less than $100,000. Lawmakers passed the first round of payments under the CARES Act in March 2020 and the Treasury Department began sending payments in early April 2020. The IRS sent more than 161 million payments, totaling more than $271 billion, according to the new data.

The first round of economic impact payments, sometimes called recovery rebates or stimulus checks, provided a $1,200 refundable tax credit for individuals ($2,400 for joint taxpayers) and $500 for each qualifying child, which was advanced to individuals by Treasury. The rebate began to phase out at $75,000 for singles, $112,500 for heads of household, and $150,000 for joint taxpayers at 5 percent per dollar of qualified income, or $50 per $1,000 earned. The IRS used 2019 returns, or 2018 returns if the 2019 return was unavailable, to determine payment amounts. The IRS created a non-filer tool to reach households without tax information on file, used data from other government agencies, and provided payments to federal beneficiaries of programs like Supplemental Security Income (SSI) through their regular benefit schedule.

According to the IRS, $203.4 billion, or 75 percent, of the $271.4 billion in payments went to households with under $100,000 in adjusted gross income. Another 10 percent of payments went to households that did not have a 2018 or 2019 tax return on file. Instead, the 22.2 million households without filing information either qualified for payments using the IRS non-filers tool or using information from other government benefit programs (such as Social Security, Railroad Retirement, and Veterans Benefits). It is likely that many of the 22.2 million non-filers and federal beneficiaries have incomes below $100,000, indicating the share of payments to households earning less than $100,000 could be higher than 75 percent.

The IRS sent 122.5 million payments electronically for a total of more than $208.9 billion in electronic payments. Another 35.8 million were sent as paper checks for a total of $56.1 billion, and 3.5 million were sent via debit card for a total of $6.3 billion. Electronic payments were the most common across all income groups except the zero or negative AGI group, which received a greater share of payments by paper check. Across the groups, households making more than $200,000 received the largest share of payments via debit card, but it only comprised 14 percent of the groups’ total payments. The IRS sent debit cards to certain taxpayers who had filed tax returns but who did not have bank account information on file. 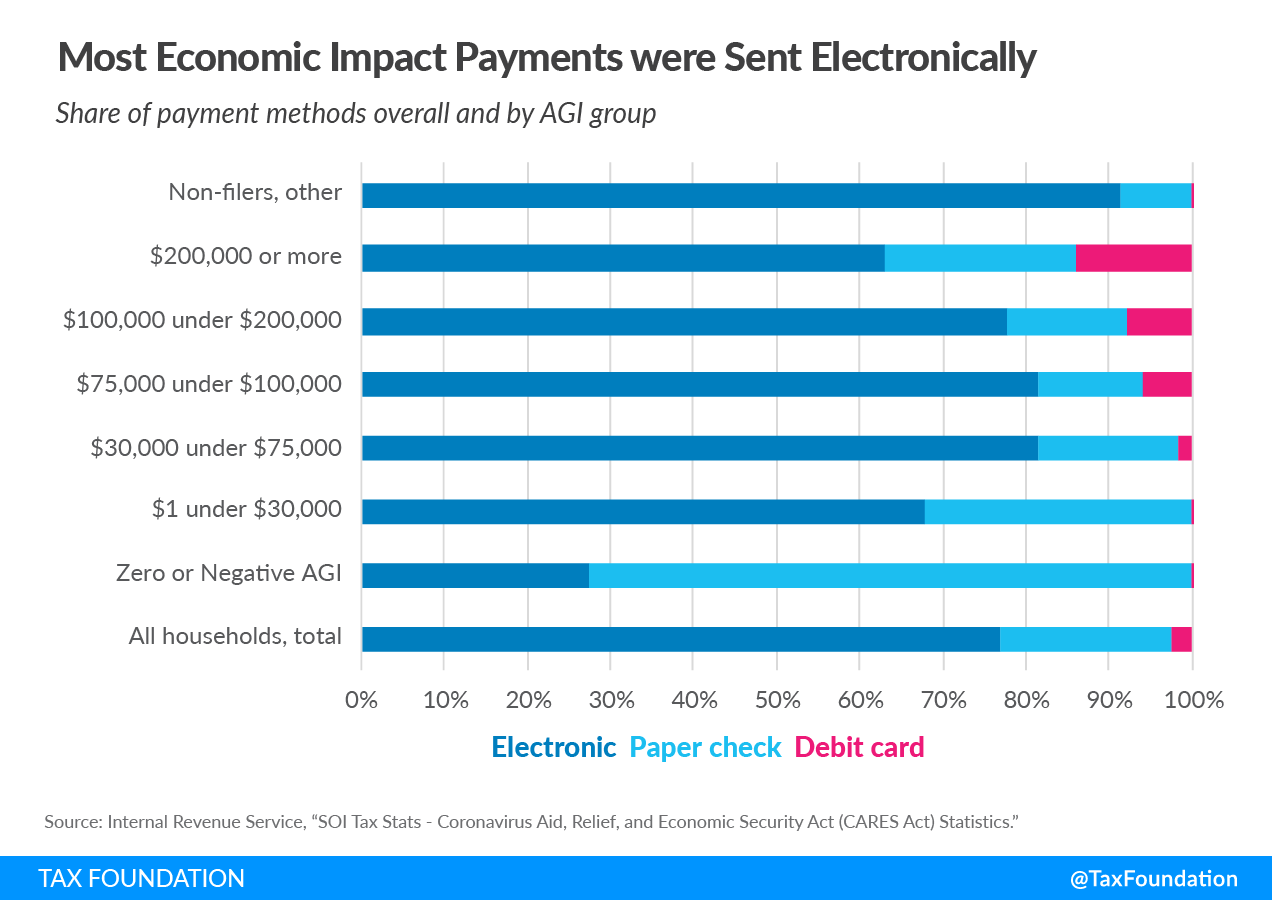 Since the first round of payments in early 2020, Congress enacted a second round of payments in December 2020 as part of the Consolidate Appropriations Act, 2021. The second round consists of $600 payments to individuals and qualifying children based on 2019 income. Like the CARES Act payments, the payments begin to phase out at $75,000 for single filers, $112,500 for heads of household, and $150,000 for those married filing jointly. Because the second round consists of smaller individual payments than the first, they phase out to zero at lower income levels than the first round.

Lawmakers gave the IRS until January 15, 2021 to send out the second round of payments. Disbursement began on December 29, 2020, and the IRS began sending paper checks on December 30, 2020. By January 8, 2021, the IRS had sent out more than 100 million second-round payments to households. The IRS has not yet released data on the second round of payments.

Households eligible but not receiving either round of payment can claim the amount they are eligible for when they file their taxes for tax year 2020, which will affect the IRS’s administration of the tax season. Adjustments will only be made in the taxpayers’ favor, so taxpayers will not see any increase in their tax liability related to the payments. Additionally, President Biden has signed an executive order to ask the Treasury Department to focus on getting payments to the approximately 8 million households that have still not received them.