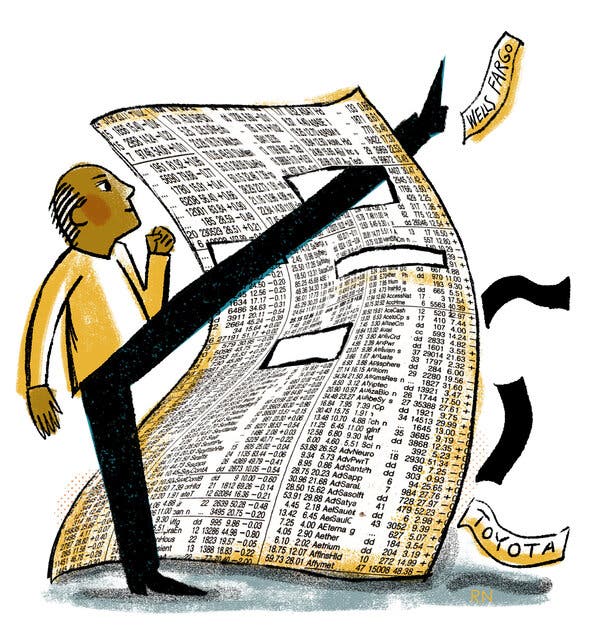 Imagine a 401(k) where there’s no investment menu of stock funds. Instead, you get to make one that aligns with your values.

You could begin by knocking out oil drillers or gun manufacturers, or subtracting companies one by one depending on which ones have crossed you (or the world) lately. And when you’re done, you — and not a mutual fund — own individual pieces of every other security that you’re not beefing with, whether personally or as a citizen of the world.

Some of the biggest names on Wall Street can conjure up this tantalizing prospect, which is called direct indexing. And they’re buying up smaller firms that have already made it a reality for some wealthy investors.

Last month, BlackRock paid a cool $1.05 billion to snap up Aperio, a company that helps financial advisers invest client money this way. Earlier this year, Morgan Stanley entered this arena when it got hold of Parametric Portfolio Associates as part of its purchase of the old-line fund firm Eaton Vance.

Charles Schwab and Goldman Sachs have also made acquisitions in the general area.

So what do these direct-indexing entities do for investors now — and how many more people might benefit in the coming years?

Direct indexing starts out with a list of securities similar to the holdings of any index mutual fund that you might buy from Vanguard or Fidelity. Then, with the help of an intermediary, you buy shares (or fractions of shares) of only those securities that fit your customized plan.

Maybe you work for Google and get lots of stock as part of your compensation, so you want to avoid owning additional shares and those of other large tech companies.

Or maybe you are (or want to be) an investor focused on environmental, social or governance issues — the E.S.G. segment. You may wish to rid yourself of gun stocks, or avoid Wells Fargo, given how it treated its customers over the years, or Toyota, because it turned its back on stricter fuel economy standards in California.

Whatever companies you ditch, you still end up owning hundreds of stocks. And because you own those stocks and not a mutual fund, there are some big potential advantages: You can avoid capital gains taxes in many instances by selling the losers to offset growth in the winners.

The details get technical, and it’s a hard thing for human clients or even their advisers to manage manually. But it’s also important: If you’re in the highest tax brackets and live in a state with its own taxes, not paying attention to gains can cost you.

For investors who focus on mutual or exchange-traded funds, Parametric contends that these taxes can weigh down your returns even more than adviser fees or the costs of trading. Aperio bluntly notes on its website that “ignoring the impact of taxes is equal to willingly accepting lower performance.” A percentage point of your return can be at stake each year, possibly more.

Both companies use software to match your winners and losers to minimize your tax bills. (The companies will also help people who want to use charitable contributions of stock to keep taxes in line while maintaining the right balance in their stock portfolio.)

But we’re in rarefied air here. Most people — even more affluent people — don’t have the bulk of their money in brokerage accounts that are subject to capital gains taxes. Instead, their money tends to be in tax-deferred retirement accounts or 529 plans.

So how could way more people get access to the choose-your-own-adventure part of this approach? A couple of important factors are already in place: the decline and fall of trading commissions, and the rise of the ability to purchase fractional shares of stock.

Falling commissions, combined with technology that allows software to track a portfolio’s stocks, rebalance it or seek tax savings when appropriate on any given day, can keep overall costs reasonable. And buying fractional shares means that you don’t need nearly as much money to own several hundred bits of stock, since you don’t have to have $1,800 to buy a single share of Google.

And indeed, for all of Aperio’s boasting that its services are “designed for sophisticated wealth advisers” who “serve ultra high-net-worth clients,” the company has already been serving the masses, like synagogue preschool directors.

A few years ago, the pension board of the Reform Judaism movement took Aperio up on its offer to create an E.S.G. investment option for its 403(b) plan. The board used 100 years of social justice resolutions to shape the composition of the portfolio. Then, it added another tenet to its investment philosophy in order to own additional shares of companies that were Israeli or had made investments in Israel.

The fee for this customized investment is 0.15 percent annually for the first $10 million under management and then 0.10 percent beyond that. “You cannot find an E.S.G. mutual fund for that cheap in the marketplace,” said Michael Kimmel, the board’s chief executive. (A disclosure: Five years ago, I gave a talk about kids and money at the Reform movement’s annual conference.)

So what will it take for more employers to put together something like this? Or, better yet, when might administrators of workplace retirement plans allow individuals to build their own? (Or, for that matter, for firms like Vanguard and Fidelity to let people do this in their brokerage accounts?)

When I asked Parametric’s chief executive, Brian Langstraat, he joked that I must have been eavesdropping on Parametric’s calls with Morgan Stanley and its other new acquisition, E-Trade. “It’s certainly a topic of conversation within virtual Zoom calls pinging around the country,” he said.

One challenge is inertia. Mr. Kimmel, the pension board executive, noted that only about 2 percent of his retirement plan’s money moved to the new offering, even though many of his rabbis are social justice warriors.

Such slow going is common, though. As much as investors express interest in E.S.G. investing in surveys, it’s a pain to decipher new offerings, move money around and change advisers if yours is not down with the program.

A direct-indexing start-up called OpenInvest is more focused on bringing E.S.G. to the masses than catering primarily to the wealthiest among us. It faces the challenge of persuading financial advisers for people who are not in the 1 percent to make all of this more available.

“This is a storytelling industry that we’re in,” said Joshua Levin, a co-founder of OpenInvest who has written engagingly about the transformation that the company hopes to help spark.

At first, he thought that the shunning of Wells Fargo and Facebook, as favored by some of his customers, was the best tale to tell about what he and his colleagues were making possible. Now, he’s trying to get listeners to see the E.S.G. movement as a feature and not a product. The goal is for OpenInvest to be able to add its tools to existing portfolios without requiring someone to change advisers or do much more than push a single button.

“The lack of an engaged end consumer is what stymies innovation in the entire financial services industry,” he said. Which is not meant to insult the inert. “All we think about is mainstreaming this and what tech we can build to do this stuff.”

I asked Mr. Levin whether BlackRock had tried to buy his company too, and he wouldn’t say. But the fact that big players like that are circling this area suggests that they know how enticing bespoke, tax-friendly indexed portfolios are.

Start-ups being start-ups, Mr. Levin’s company may be just as likely to flame out as it is to turn into a unicorn. But no matter what, five years from now, I’d bet that many more of us will be investing this way. And we’ll probably be happier without misbehaving companies among our holdings.