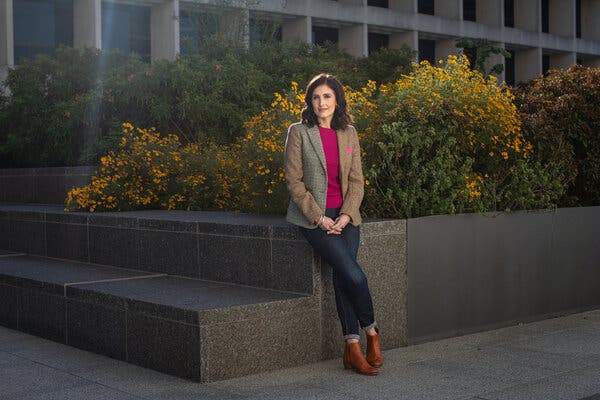 During the first months of the pandemic, Leah Tyrrell found that she could pull off a balancing act: working in sales for a San Diego clothing maker and caring for her three young daughters at home. Her hours had been reduced, and working remotely in the morning left her time to be with the children the rest of the day.

“At the time, I thought I could tackle it,” Ms. Tyrrell said. That changed in August when her employer started asking people to return full time. Her company was flexible, but something had to give — and since her husband was bringing home a bigger paycheck, she quit work to help her girls, ages 9, 8 and 5, with online school.

“It was a very tough decision, but we just decided that, especially having a third child in kindergarten on the computer, I would need to sit and guide her through what the teacher was talking about,” she said.

Retirement is still on the distant horizon for Ms. Tyrrell, 43, but she hopes the long-term damage to her nest egg will be minimal. She participated in her company 401(k) plan, which had a matching contribution, and aims to resume saving when she goes back to work after the pandemic recedes.

“When I do go back, I hope it will be with a company that provides a match, but I’ll definitely lose at least a year of any kind of savings,” she said.

The hit to her retirement resources — and to those of other women in her shoes — could be considerably deeper.

Policy experts have long acknowledged a gender gap in retirement security. Women tend to earn less than men, and they are more likely to take time off from work to care for children or elderly parents. Even brief career interruptions diminish wage growth, retirement savings and Social Security benefits, which are determined by wage history. Women also tend to outlive men, needing to stretch resources over more years. In particular, they face higher health care expenses in retirement.

Now, the pandemic recession is disproportionately damaging the careers of women — so much so that some experts call it a “shecession.”

In November, the national unemployment rate dipped to 6.7 percent from 6.9 percent, the Labor Department reported last week. But the pace of job growth has stalled, and millions have dropped out of the labor market altogether, especially women. One recent study found a disproportionate decline in employment for women of prime working age, 25 to 55, compared with men — and especially so for mothers.

Women are overrepresented in industries experiencing the highest job loss, according to a recent report published by the Y.W.C.A. U.S.A. Latina, Black and Asian-American women have been hit hardest, the report found. Many entered the pandemic earning less, and they have experienced higher jobless rates in the downturn, said a co-author of the report, Victoria M. DeFrancesco Soto, assistant dean at the Lyndon B. Johnson School of Public Affairs at the University of Texas.

“They already were vulnerable, and many may never become fully employed again,” she said.

Losses can be steep over time.

Even a short-term interruption in wages can have a surprisingly large impact on retirement. Each year out of the work force translates into losses considerably larger than the immediate salary over the arc of a career, according to research by the Center for American Progress. The losses compound over time in the form of missed wage growth, retirement savings and Social Security benefits, as illustrated by a calculator developed by the center.

For example, a 35-year-old woman earning $80,000 a year who leaves the work force for five years can expect to lose $197,000 in retirement assets and benefits, assuming she retires at age 67, according to the calculator.

“My biggest worry about what’s going to happen as a result of this recession in the longer term is that we’ll be setting back families dramatically,” said Michael Madowitz, an economist with the center who developed the calculator.

Jobless rates for women have spiked. Four times as many women as men dropped out of the labor force in September alone, and barely half that number returned during October and November, according to Center for American Progress research.

For Edith Ben Ari, the breaking point came in August. She was struggling to balance her job as head of a school in Oakland, Calif., for children who have learning disabilities with the needs of her two children, ages 8 and 6. Her parents, in their 80s, live nearby and are in good health, but the pandemic also focused her on the possible need to pivot attention in their direction at any moment.

“The combination of running a school remotely, my meetings on Zoom and providing the care my kids needed was brutal,” said Ms. Ben Ari, 44, who has worked in special-needs education for more than 20 years.

“I was pouring my heart and soul into my job, which I loved so much,” she said. “But I realized I just couldn’t keep doing it — I was stretched so thin that by the end of the day I had nothing left to give to myself, my family or anyone else.”

Ms. Ben Ari’s husband, a financial adviser, is the higher earner; that, combined with the need to focus on her family, led her to resign in August; she plans to continue her work in special education as a consultant.

That financial calculation is common, said C. Nicole Mason, president and chief executive of the Institute for Women’s Policy Research, a think tank focused on increasing the power and influence of women and closing inequality gaps.

“If you’re trying to calculate who should leave the work force, the pay equity gap means that women are more likely to exit the work force when there are two earners,” she said.

An oft-cited Census Bureau statistic is that women earn 82 cents for every dollar earned by men. But that’s a rough measure, and the institute’s research has found that the gap is even larger — 49 cents on the dollar in 2015 — when measuring earnings of all workers, including those who work part time or sporadically, over a 15-year period.

The structural problems that women face during their working lives translate into problems maintaining their living standards in retirement, and raise their risk of falling into poverty late in life. Those risks are accentuated by their longevity: In 2018, the average life expectancy in America was 81.7 years for women and 76.6 for men, according to the Society of Actuaries.

Single women are most at risk — a group that includes those who are widowed, divorced or never married (and they’re more likely to live alone than men).

What can be done?

Social Security plays a crucial role as a source of guaranteed lifetime income in retirement, and most proposals advanced by Democrats include changes aimed at improving the economic security of women.

A plan from President-elect Joseph R. Biden Jr. would tweak Social Security’s benefit formula to award work credit to people who cared for children or other relatives. It would also expand benefits for widows in certain circumstances, and bump up benefits for seniors who had collected payments for 20 years. Finally, it would adopt a new yardstick to determine Social Security’s annual cost-of-living adjustment — the CPI-E, an experimental Labor Department inflation measure designed to more accurately reflect the inflation experienced by seniors, especially health care expenses.

Overhauls in the retirement saving system could play a role in closing the gender gap. In 2019, the average accumulation in a workplace retirement plan was $131,000 for men and $88,000 for women, Vanguard reports.

For example, Mr. Biden has proposed allowing caregivers to make “catch-up” contributions to 401(k)s or individual retirement accounts even if they are not currently in a job that sponsors a plan.

But perhaps the most significant change, experts say, would be to bolster the nation’s system of child care.

Mr. Biden has signaled that supporting caregivers would be a priority for his administration, and he has proposed $775 billion in new spending over a 10-year period that includes paid family leave and changes to Medicaid.

Dr. Soto, the assistant dean in Texas, argued, “Women can’t be full participants in the labor force and pay into their retirement if they don’t have child care — or if their child care workers aren’t getting paid enough and not receiving benefits themselves.”