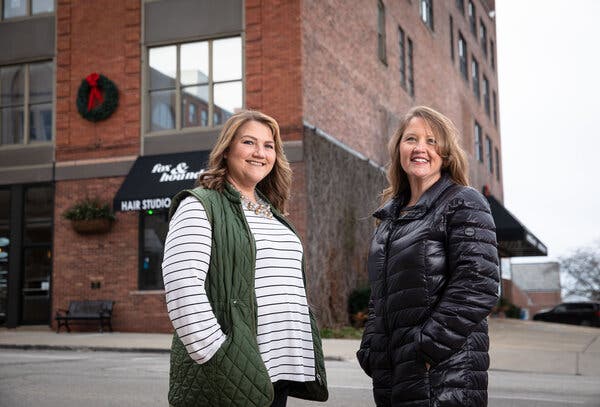 Denise Geske panicked two years ago when her accountant told her about a new Illinois law that would require her to enroll her employees in a retirement savings program.

“As a small-business owner, I felt it was overwhelming,” she said. “I was terrified that I was going to be mandated to do one more thing.”

Ms. Geske, co-owner of Fox & Hounds Salon and Day Spa in Bloomington, Ill., is close with her staff of 32 massage therapists, aestheticians and nail technicians. She wanted to give them health and retirement benefits, but since 2008, when she bought the business with her sister, Casey Pirtle, providing them with a savings plan had felt beyond her reach.

Her concerns were eliminated by Illinois Secure Choice, a state-administered automatic individual retirement account program begun in 2018. The management and cost hurdles that Ms. Geske had assumed the state would make her take on never materialized — the Illinois program, she said, is not complicated or bureaucratic, and she bears none of the cost. Her employees, the savers themselves, pay the fees — but those are kept low by the large pool of participants.

Now, every Fox & Hounds worker has access to health insurance and retirement savings. “And I didn’t have to invest a lot of time figuring it out, and it’s free,” Ms. Geske said. Another benefit: She is under no pressure to match workers’ contributions. Federal guidelines prevent anyone other than the individual account owner from contributing to the accounts.

Auto I.R.A.s like the program in Illinois were once contemplated on a national level. In 2007, a Brookings Institution report about their potential for universal retirement security prompted politicians, including Barack Obama, to talk about a federal auto I.R.A. plan. But legislation on that level never passed, so states started advancing the idea of enforcing, and managing, employer plans themselves.

Business owners in other states can expect to navigate some version of Ms. Geske’s involuntary education on auto I.R.A.s in the months and years to come. Outside Illinois, programs are running in California and Oregon. Connecticut, Colorado and Maryland will start signing up employers in 2021. New Jersey has passed a law to build its own version. And at least 20 states and cities introduced legislation this year to establish programs or form study groups to explore their options, said Angela M. Antonelli, executive director of the Center for Retirement Initiatives at Georgetown University.

For all those states and cities, the goal is the same. The employers of half of private-sector workers in America — 55 million people — do not offer a retirement savings vehicle, Ms. Antonelli said. Anyone can open an I.R.A., but Ms. Antonelli said many workers were unwilling to navigate opening and funding an account on their own.

The programs share similar characteristics. In California, Illinois and Oregon, employers that do not offer a retirement savings program like a 401(k) but have more than a certain number of employees must enroll with the state program by a deadline or face a fine (in California, $250 for each employee). Once a business is enrolled, it uses its payroll system to register workers, who can opt out of the savings program at any time.

Paycheck deductions happen automatically and generally start at 5 percent, with some programs including an annual automatic uptick (in California, topping off at 8 percent) that employees can adjust. Other common characteristics include portability, meaning workers can keep saving in the same plan if they change jobs, and easy access to funds. Auto I.R.A.s are generally Roth I.R.A.s, which are funded with after-tax dollars and typically allow for withdrawals of contributions without penalties.

John M. Wasilisin, executive director of Maryland’s program, MarylandSaves, which will begin next year, likes that feature. If someone has an emergency medical expense, he said, “they can easily get to their money.”

In a year of coronavirus-induced calamities, that is important — especially to the American workers whom auto I.R.A.s may benefit most: the low-income ones. While about half of workers ages 25 to 64 in the top 10 percent of earners have access to a retirement plan at their job, the number drops to 23 percent in the bottom 50 percent of earners, according to an August report by the Schwartz Center for Economic Policy Analysis at the New School in New York.

States are discovering that access makes a difference. In 2017, Pew researchers found that only 13 percent of workers said they would opt out of an I.R.A., but that number could look a little different in practice. In California, for example, 33 percent of workers who were offered enrollment since July 2019 chose to opt out of CalSavers, that state’s auto I.R.A. At Fox & Hounds, in Illinois, 30 to 35 percent have opted out.

Some of those workers may have set up I.R.A.s independently. Others may have a spouse with a 401(k). And some may feel they can’t afford to put away even $50 per paycheck. Regardless of the reason, all the active programs have adopted a no-pressure philosophy.

“We make it incredibly easy for people to opt out,” said Katie Selenski, CalSavers’ executive director.

Tekla Patton, the office manager at Triple E Trucking, a company in Bakersfield, Calif., with 46 employees, agreed. “They’ve made it so simple to navigate, it takes barely any time,” she said.

The ease of getting started, though, may be driving the success of auto I.R.A.s. The Pew study found that 73 percent of workers said they supported automatic enrollment. That doesn’t surprise Mr. Wasilisin.

“If I have to go into a bank like T. Rowe Price or Vanguard and set up my own account, it’s too complicated, and I’m not going to do it,” he said. “What we’re doing makes the process easy. It’s like when a little kid is sick and you crush up their medicine and add it to Jell-O. They don’t know they’re getting the medicine, but it’s helping them.”

If there is a whiff of paternalism to the plans, the lawmakers behind the current swell of auto I.R.A. proposals don’t seem to mind. The reason, Mr. Wasilisin said, could be this: “Unless you have retirement savings, you may need housing subsidies or food stamps or other things the government will have to pay for.” (About 26 percent of working adults had nothing saved for retirement, according to a 2019 survey from the Federal Reserve).

There is also a moral imperative, Ms. Selenski said. “We have to level the playing field to make sure all workers have access, and government has to play a role in making that happen.”

The moral part of the equation was behind Ms. Patton’s decision to sign up Triple E Trucking with CalSavers in 2018 before the imposed deadline.

“Some of our employees had been asking if we were ever going to offer another retirement plan,” she said. A 401(k) the company tried more than a decade ago had been too cumbersome to manage. “I really felt for those guys and wanted to do something, because you can’t just live on Social Security when you retire. You’ll be in poverty.”

Auto I.R.A.s are not designed to make investors rich, just more likely to avoid being broke in their later years. Money is generally invested in funds with a mix of stocks and bonds appropriate for a worker’s age, managed by a private company that is regulated by the state. The target-date retirement funds become more conservative as participants approach retirement to reduce investment risk and protect against loss, though employees can adjust their fund type and risk level.

Illinois is seeing steady growth in worker participation despite the economic mess brought on by the coronavirus. In March, Illinois Secure Choice had 60,000 funded accounts, with $17.2 million in assets. In November, those numbers had climbed to 77,000 and $42.8 million.

“To me, that underscores the value of these programs and the importance of having access,” said Courtney Eccles, the director of Illinois Secure Choice.

As auto I.R.A.s gain footholds around the country, critics have surfaced. “It’s hard to say it’s a bad thing to make a savings opportunity available to people, but I would have preferred that there was more thought behind them,” said Andrew G. Biggs, a resident scholar at the American Enterprise Institute, a conservative think tank, and former principal deputy director of the Social Security Administration.

“A danger I see is, if you offer these plans, employers that are offering 401(k)s might stop doing that,” he said, given that employers can’t match employee contributions. “If you’re a start-up company, you might say, ‘Just put me in the auto I.R.A.”

In addition, Mr. Biggs said, “if you’re a low-income person, you probably have bigger fish to fry” than saving for retirement. As a partial solution to the savings crisis, he recommends increasing Social Security benefits “pretty substantially” for low-income workers.

Yet employers like Ms. Geske, who is also a Secure Choice saver, are relieved to have the option.

“I’m 51, and before this program came along, I had no retirement savings,” she said. “I was putting everything I had into the business. Now I’ve been checking my account balance, and I see I’m actually making money I don’t even miss, and I’m kicking myself for not starting earlier.”