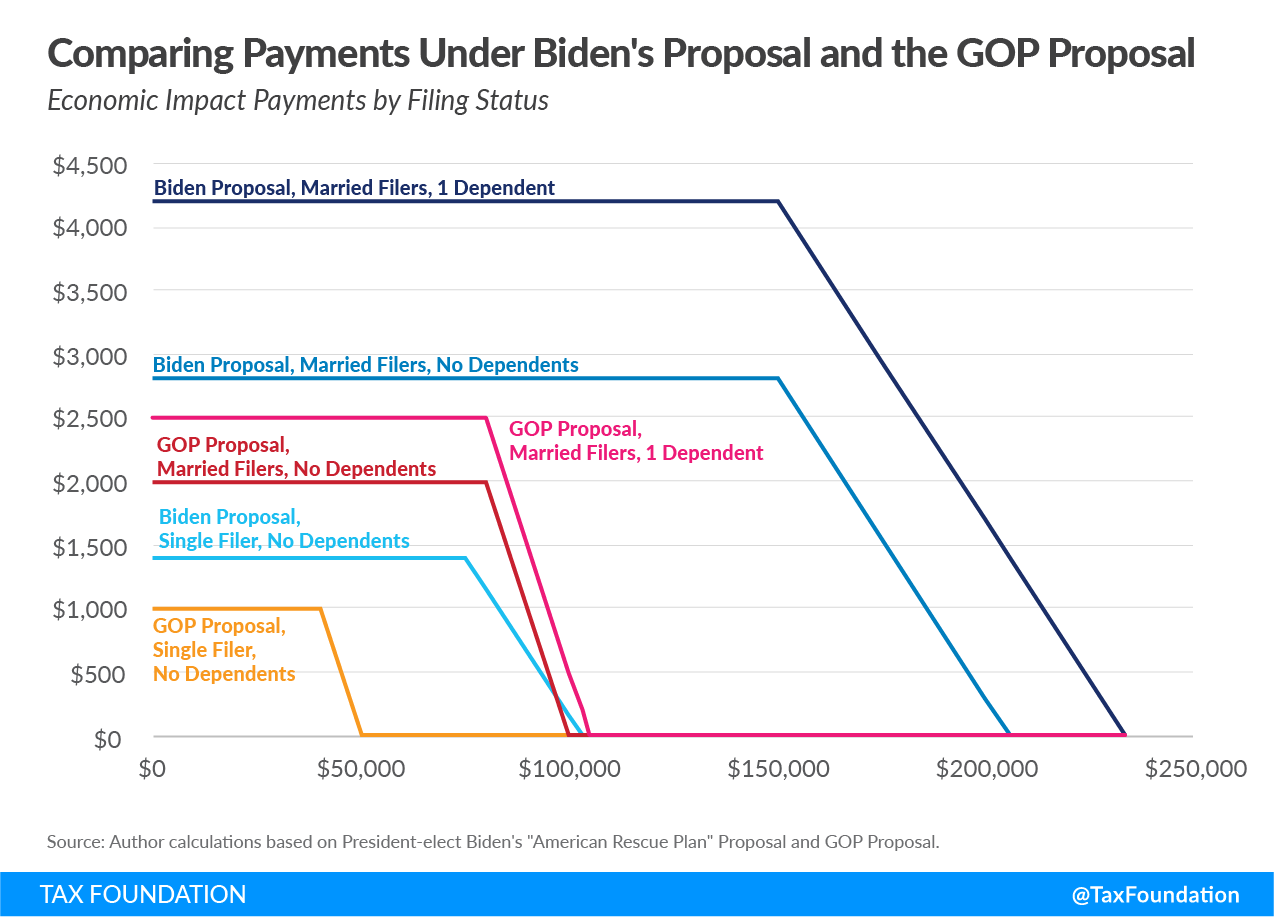 President Joe Biden is calling for a third round of economic impact payments to households as part of his $1.9 trillion American Rescue Plan. Under the plan, the payments would be $1,400 per person, topping off the recent round of $600 payments for a combined $2,000 per person. Senate Republicans have proposed payment amounts of $1,000 per individual and $500 per dependent, lower income thresholds, and faster phaseout rates.

Other potential options include lower income thresholds for the $1,400 payments or faster phaseout rates. Each variation would affect the total cost, the distribution of the payments, and their targeting.

If Biden’s proposed $1,400 payments used the same phaseout thresholds as previous payments—starting at $75,000 for single filers, $112,500 for heads of household, and $150,000 for those married filing jointly, at a rate of 5 percent per dollar of qualified income, or $50 per $1,000 earned—more than 94 percent of tax filers would receive a payment. We estimate that the payments would cost $441 billion.

Additionally, non-filers would receive payments too, but they are not included in any of our estimates. In the first round of payments in early 2020, for example, 22.2 million non-filers received payments and the IRS estimates another 8 million are eligible but haven’t yet received their payment.

The new proposal from 10 Senate Republicans would change three aspects from Biden’s proposal: the payment amounts, the income phaseouts, and the phaseout rate.

The payments under the GOP proposal would be $1,000 for individuals and $500 for child and adult dependents. They would begin phasing out for single filers at $40,000 and for married filers at $80,000. The phaseout rate would be doubled to 10 percent; payments would fully phase out at $50,000 for single filers and $100,000 for married  filers. We assume that payments for dependents would phase out as they have done under the first two rounds of payments.

As another alternative, lawmakers could consider a variation of the Biden plan with $1,400 per person payments. Lowering the income phaseout start points to $60,000 for single filers, $90,000 for heads of household, and $120,000 for joint filers, without changing the phaseout rate, would limit payments to 92.5 percent of taxpayers. The average payment would be $2,169. We estimate that the payments would cost $417 billion.

The $1,400 payments could be further limited by lowering the income phaseout start points to $40,000 for single filers, $60,000 for heads of household, and $80,000 for joint filers, without changing the phaseout rate. That would limit the payments to 87.1 percent of taxpayers. The average payment would be $1,920. We estimate that the payments would cost $361 billion.

Instead of changing the income levels where $1,400 payments phaseout, lawmakers could keep them the same but use a faster phaseout rate. Increasing the phaseout rate from 5 percent to 10 percent, or to $10 per $1,000 earned, would limit the payments to 92.1 percent of taxpayers. The average payment size would be $2,219. We estimate that $1,400 payments to taxpayers with a faster phaseout would cost $429 billion.

The rebates proposed by President Biden, if phased out at the same levels and rate as previous payments, would reach more than 94 percent of taxpayers. The GOP proposal from 10 Senate Republicans would narrow the payments to about 74 percent of taxpayers and cost roughly half as much as Biden’s proposal. Under Biden’s proposal, a payment to a single filer with no dependents would phase out entirely at $103,000. Under the GOP proposal, it would phase out entirely at $50,000.

Further targeting a third round of payments to lower-income households, which have been most affected by the pandemic-induced downturn, makes sense. Lawmakers have enacted more than $3 trillion of support over the past year, successfully delivering relief to households and businesses in the early months of the pandemic. Providing further targeted relief to the households still struggling will help them bridge the gap until widespread vaccine distribution and an economic recovery can take hold.

Depending on the timing of a third round of payments, lawmakers could consider using 2020 incomes to determine payment amounts as another way to better target households in need.