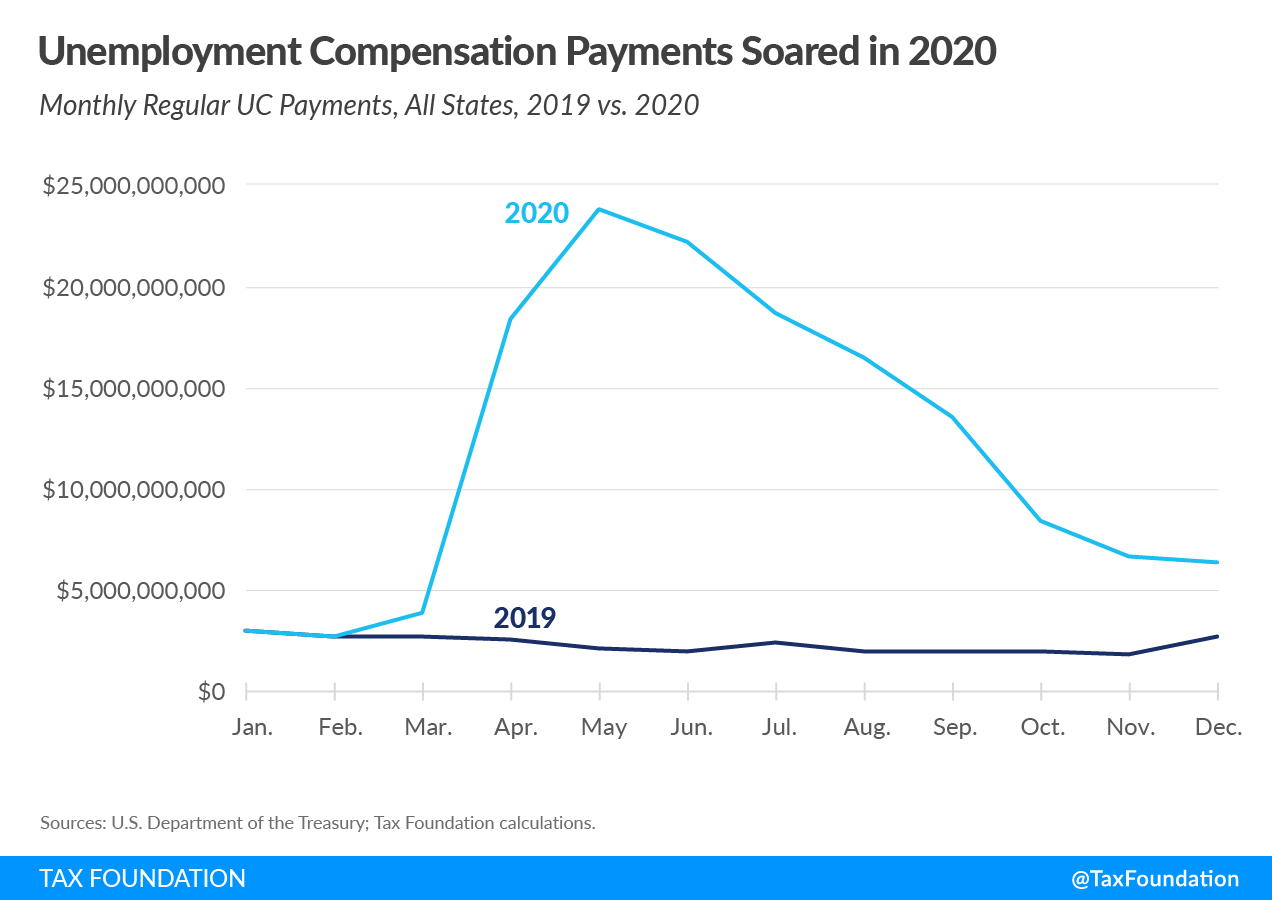 State tax revenues held steady in 2020, coming in less than one-tenth of 1 percent lower than in 2019, according to the latest JPMorgan research (which is consistent with earlier data), and combined state and local revenues have likely risen year-over-year. This is a curious backdrop to the current federal debate, in which Congress is considering authorizing $350 billion in direct aid to state and local governments. There is, however, one area where states face a serious fiscal hardship: their unemployment compensation trust funds. If Congress wants to do something meaningful to help states with their revenue needs, while prioritizing fairness and avoiding perverse incentives, they should start here.

In the five years preceding the pandemic, state unemployment compensation (UC) payments averaged $31.4 billion a year (inflation-adjusted). In 2020, state payments soared to $144.1 billion, depleting most states’ reserves and forcing 17 of them to take out a combined $48.4 billion in federal loans, known as Title XII Advances. These will ultimately need to be repaid, which will require raising unemployment insurance taxes on employers.

The federal government has already invested heavily in unemployment compensation programs to provide additional relief to those laid off during the COVID-19 pandemic, spending $427.4 billion through January 2021, primarily through three aid vehicles:

All of this has greatly helped those receiving unemployment benefits during the pandemic, but it has not alleviated states’ own burdens in paying regular benefits at a cost of $144.1 billion through the end of December. Every state has seen a substantial strain on its unemployment compensation trust fund, and federal efforts to offset those burdens have advantages on multiple fronts. It is a fiscal response that meets a genuine, widely felt state need, and which can be addressed in an equitable way. It avoids providing an infusion of one-time general fund moneys that most states do not need, and which could create perverse incentives. And, since unemployment insurance taxes on businesses rise automatically when trust funds are depleted, a federal replenishment would promote job growth by avoiding costly tax increases on rehiring and maintaining employment.

Many governors have intervened to limit the size of automatic rate increases. In Maryland, for instance, Gov. Larry Hogan (R) issued an executive order to forestall a projected 600 percent increase in unemployment insurance taxes for businesses with no layoffs whatsoever, and far more for businesses that were forced to lay off employees during the pandemic. Pre-pandemic, an employer with no history of layoffs paid a low $25.50 per employee in Maryland. Absent the governor’s intervention, a company forced to lay people off could pay as much as $1,147.50 per remaining employee—a stunning 4,400 percent increase. The governor’s actions prevent these dramatic increases for now but replenishing the trust fund is the surest way to solve the underlying problem.

The best approach would be for the federal government to directly replenish state trust funds—which are already administered by the U.S. Department of the Treasury—by a set dollar amount per week of benefits paid. This is superior to forgiving Title XII Advances, which would reward states which entered the pandemic with nearly insolvent trust funds, while providing far less to those with more prudent management. It would be a mistake for Congress to reward such lack of preparedness because, while no state was prepared for a global pandemic, states should prepare for the inevitability of a recession, and federal action should not discourage states from doing so.

Each state sets its own formula for calculating weekly benefits, moreover, so just forgiving a set percentage of expenditures likewise creates an uneven distribution. Nationally, the average state weekly payment was $334.36 (with nearly 432 million weeks claimed), but the amount varies from person to person and state to state. For, say, $100 billion, the federal government could reimburse states at a rate of $231 per week claimed, leaving states with a much more manageable aggregate burden of $44 billion in 2020. That would be a far better use of federal dollars than padding general funds with $350 billion in untargeted aid for which, in most states, there is not much need.

And if Congress still opts for a broader aid plan instead? While states don’t typically transfer general funds into their unemployment compensation trust funds, using some of those federal dollars to replenish depleted UC accounts would be one of the most responsible ways states could spend a large, but one-time, infusion that isn’t substantially needed to backfill lost revenues. Improving trust fund solvency and staving off costly business tax increases is a win-win proposition for federal and state governments alike.