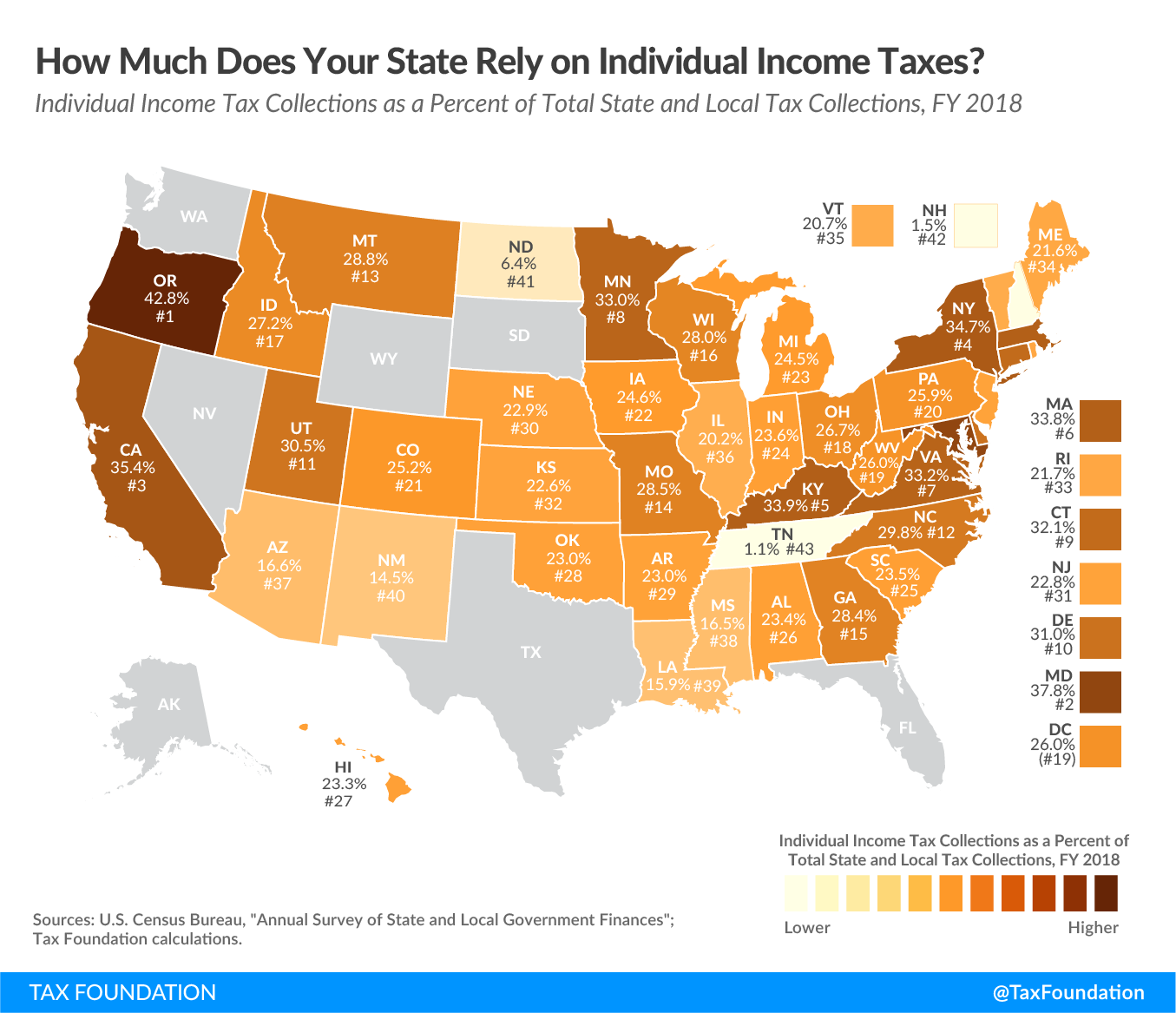 Sources of state revenue have come under closer scrutiny in light of the impact of the coronavirus outbreak, as different tax types have differing volatility and economic impact—although even beyond these unique circumstances, it is important for policymakers to understand the trade-offs associated with different sources of tax revenue. This week’s map looks at what percentage of each state’s state and local tax collections is attributable to the individual income tax.

Of all the states, Oregon and Maryland rely most heavily on individual income taxes, which account for 42.8 percent and 37.9 percent of their total state and local tax collections respectively. Both are among the 17 states where localities also levy income taxes. Oregon has chosen not to collect sales taxes, a decision which contributes to that state’s heavy reliance on the individual income tax.

While the individual income tax tends to be a major revenue source for state and local governments, some states rely on it very little, and some not at all. Eight states (Alaska, Florida, Nevada, South Dakota, Tennessee, Texas, Washington, and Wyoming) do not collect individual income taxes, while New Hampshire collects taxes on dividend and interest income but not wage income. Although this was not the case during fiscal year 2018, which the map captures, Tennessee’s tax on investment income was fully repealed as of January 1, 2021.

It is generally true that income taxes are more volatile than consumption taxes in an economic downturn, as income itself tends to fluctuate more than consumption. Even in a global pandemic, when social distancing restrictions and the nature of pandemics caused an initial drop in consumption, sales taxes have rebounded and returned to pre-pandemic levels, while income taxes—which have also rebounded—are still seeing some losses.

Volatility is not the only factor to consider. As we’ve pointed out in the past, a state’s combination of tax sources has implications for its revenue stability and economic growth. Income taxes tend to be more harmful to economic growth than consumption taxes and property taxes. Income taxes fall on labor and savings, while consumption taxes, like the sales tax, fall on what people spend instead of what they earn. As a result, income taxes tend to be less neutral than sales taxes.

Note: This is part of a map series in which we examine the primary sources of state and local tax collections