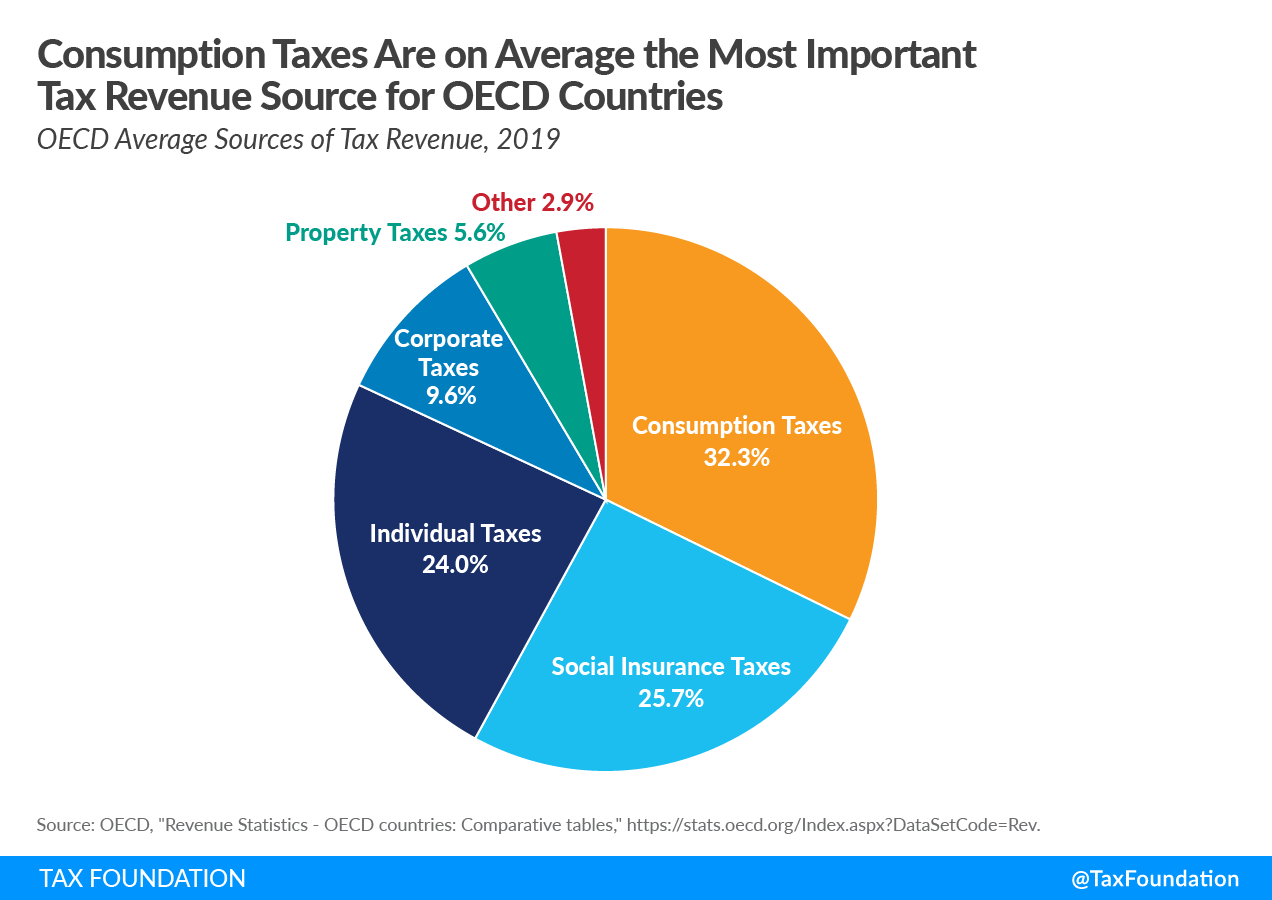 Developed countries raise tax revenue through a mix of individual income taxes, corporate income taxes, social insurance taxes, taxes on goods and services, and property taxes. The mix of tax policies can influence how distortionary or neutral a tax system is. Taxes on income can create more economic harm than taxes on consumption and property. However, the extent to which an individual country relies on any of these taxes can differ substantially.

Countries may also be situated near natural resources that allow them to rely heavily on taxes on related economic activity. Norway, for example, has a substantial oil production industry on which it levies a high (78 percent) income tax and thus raises a significant amount of corporate income tax revenue.[1]

These policy and economic differences among Organisation for Economic Co-operation and Development (OECD) countries have created differences in how they raise tax revenue.

The next significant source of tax revenue is social insurance taxes, which raise 25.7 percent of revenue on average. Individual income taxes accounted for 24 percent of total revenue across the OECD. The smallest shares of revenue were from corporate income taxes (9.6 percent) and property taxes (5.6 percent).

When comparing average 2019 and 1990 OECD tax revenue sources, the most notable change is a decrease in individual income taxes versus increases in social insurance and consumption taxes. The share of revenues from corporate income taxes has also increased compared to 1990 (despite declining corporate income tax rates[4]). The relative importance of property taxes as a source of revenue has stayed roughly constant. 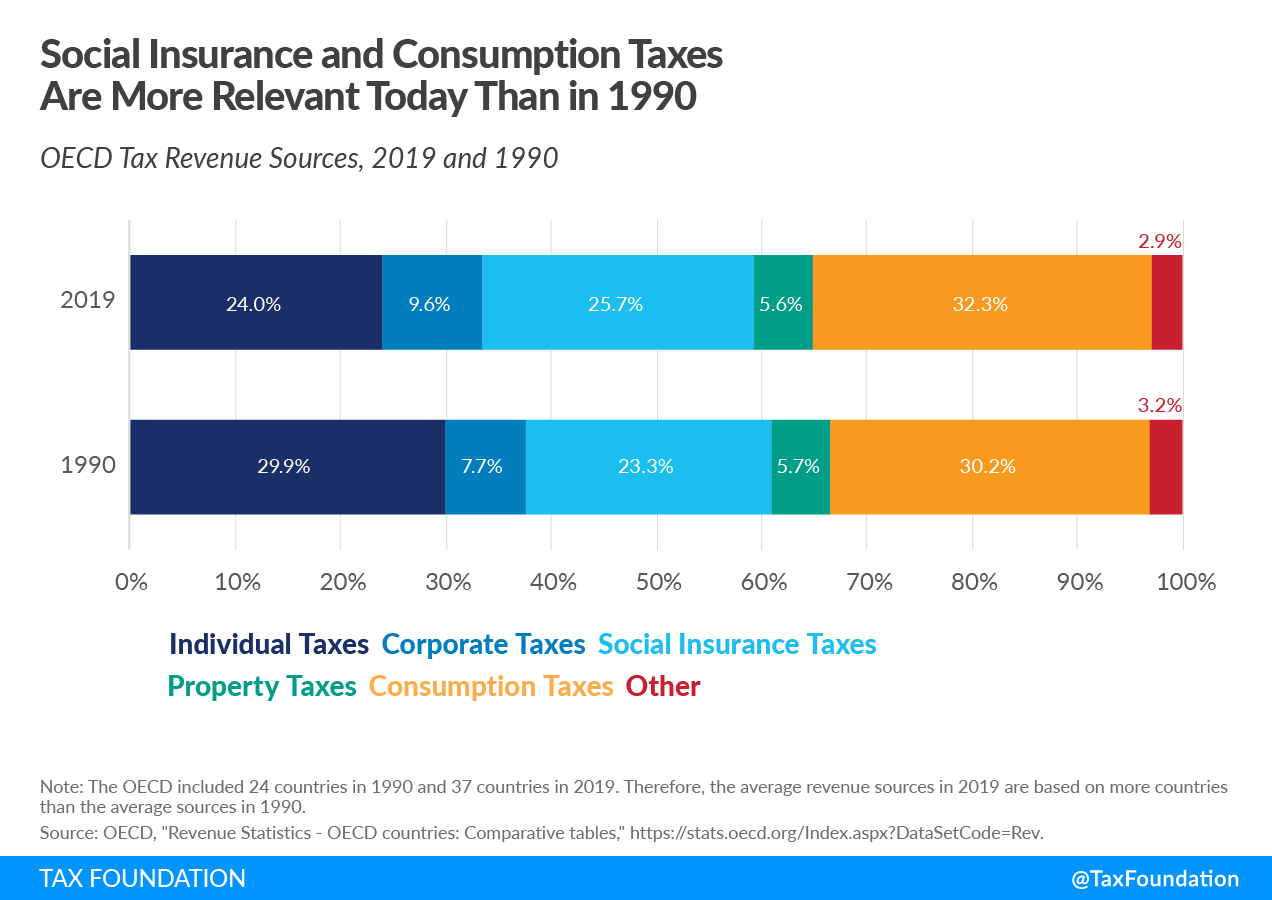 Consumption taxes are taxes on goods and services. These are in the form of excise taxes, VAT, or retail sales taxes. Most OECD countries levy consumption taxes through VAT and excise taxes. The United States is the only country in the OECD with no VAT. Instead, most U.S. state governments and many local governments apply a retail sales tax on the final sale of products and excise taxes on the production of goods such as cigarettes and alcohol.[5]

In 2019, Chile relied the most on taxes on goods and services, raising approximately 53.1 percent of its total tax revenue from these taxes. Chile was followed by Hungary (45.3 percent) and Latvia (45.1 percent) (Figure 3 and Table 1, below).

The United States raised the least amount of tax revenue in the OECD from consumption taxes, at 17.6 percent in 2019. Japan raised slightly more, at 19.5 percent, followed by Switzerland, at 21 percent.

Social insurance taxes are typically levied in order to fund specific programs such as unemployment insurance, health insurance, and old-age insurance. In most countries, these taxes are applied to both an individual’s wage and an employer’s payroll.

Income taxes are levied directly on an individual’s income, beginning with wage income. Many nations also levy their individual income tax on investment income such as capital gains, dividends, interest, and business income. These taxes are typically levied in a progressive manner, meaning that an individual’s average tax rate increases as income increases.

The country with the highest reliance on individual income taxes in 2019 was Denmark (52.4 percent), followed by the United States (41.5 percent) and Australia (41.1 percent) (Figure 3 and Table 1, below).

Colombia relied the most on its corporate income tax, at 24.5 percent of total tax revenue. Chile (23.4 percent), Mexico (21.3 percent) and Australia (19.1 percent) also relied heavily on their corporate income tax compared to the OECD average of 9.6 percent (Figure 3 and Table 1, below).

A much smaller source of tax revenue for most OECD countries is the property tax. The property tax is levied on the value of an individual’s or business’ property. Other types of property taxes include estate, gift, and inheritance taxes, and net wealth taxes. 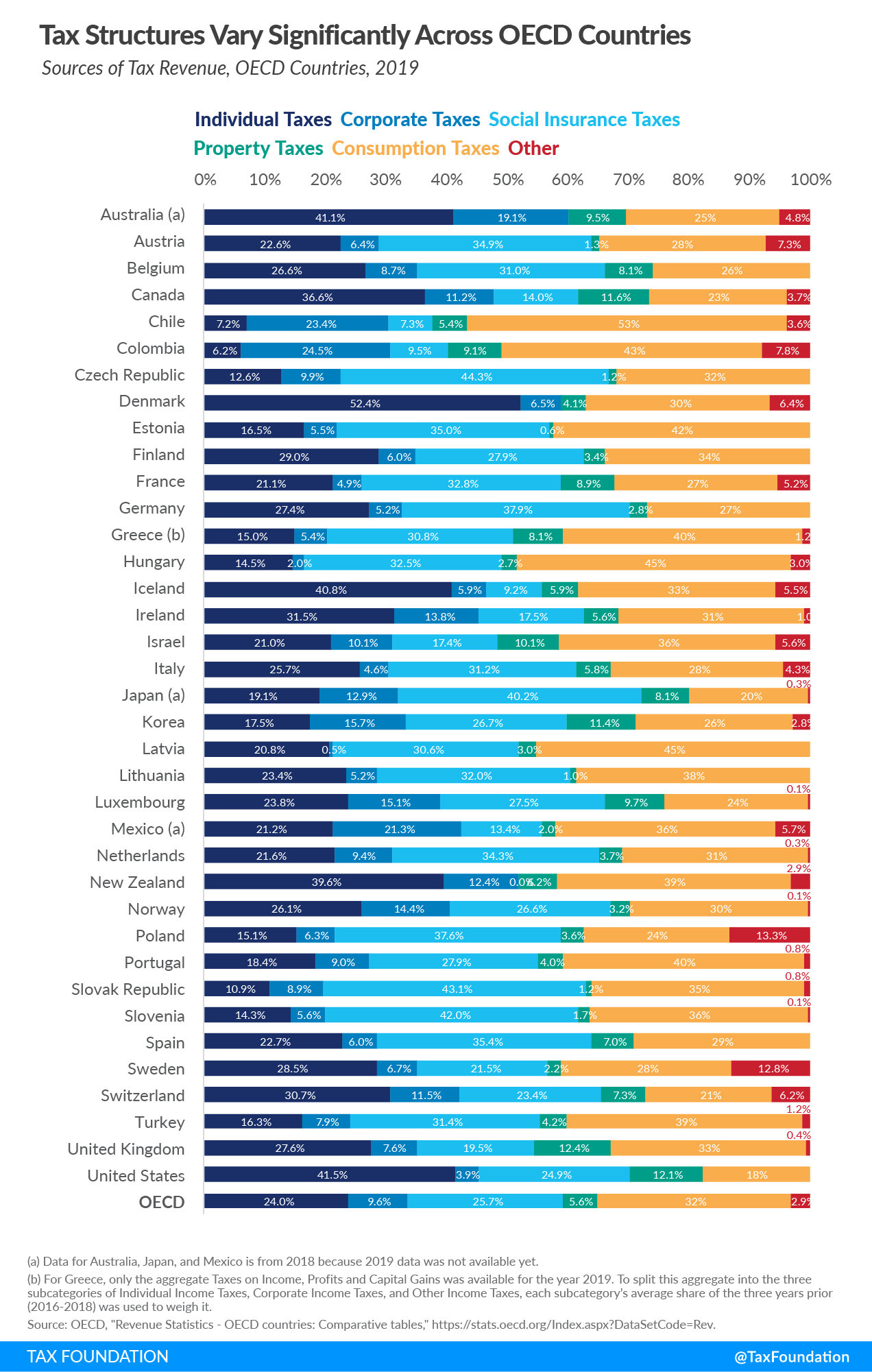 When looking at the sources of tax revenue by region, including non-OECD countries, there is a lot of variation, reflecting economic and social differences across regions. 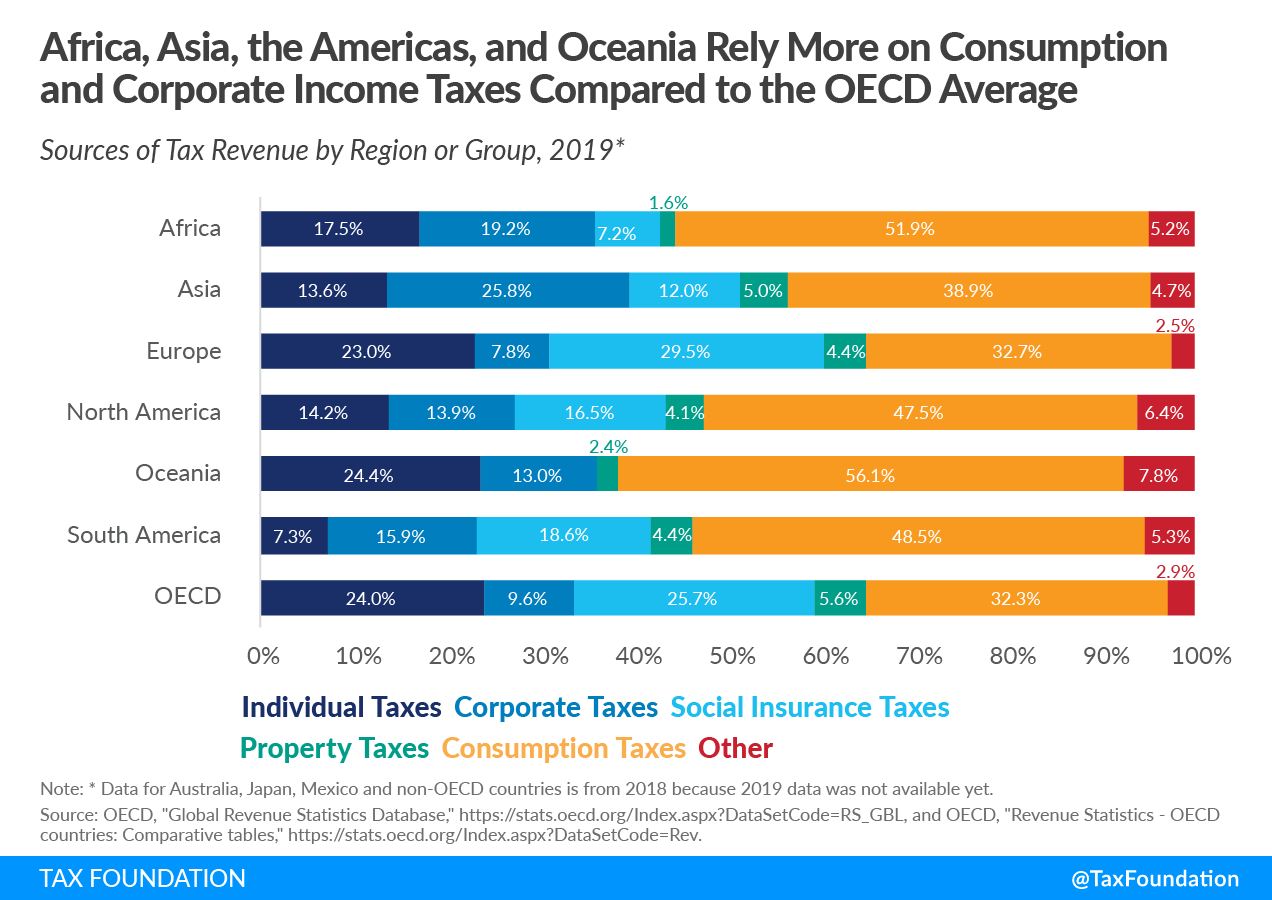 Sources of OECD Tax Revenue by Level of Government 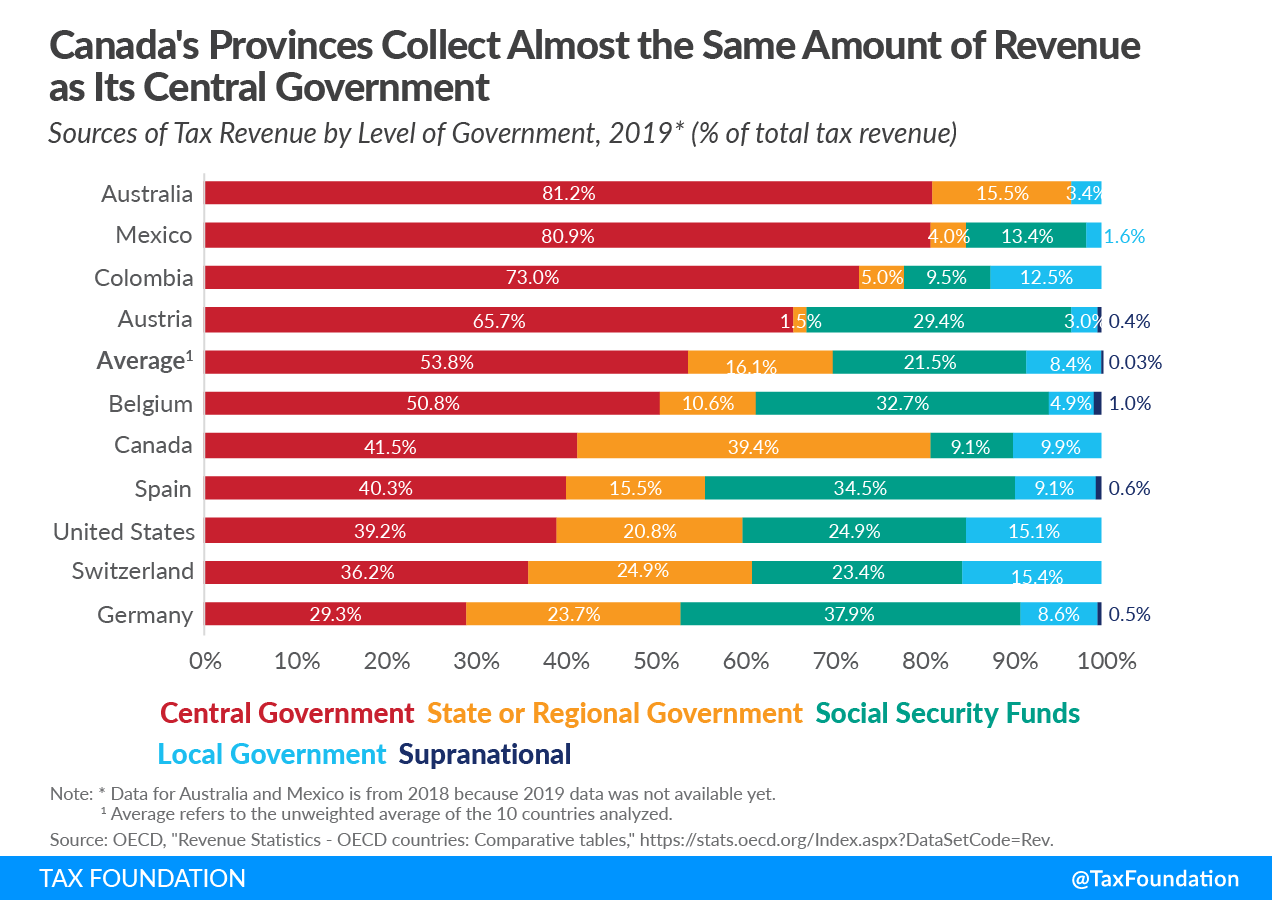 When looking at both OECD and non-OECD countries by region, Asia, Africa, and South America rely more on consumption taxes and corporate income taxes and less on income and social insurance taxes compared to the OECD average. On average, OECD and non-OECD countries in North America rely more on corporate income taxes and “other taxes” than the OECD average and less on social insurance and individual taxes. On the other hand, Oceania doesn’t rely at all on social insurance taxes, while consumption taxes are the region’s most important revenue source.

In 2019, 10 OECD countries also collected taxes at the state or regional government level and six of them raised more than 15 percent of their tax revenue at this level of government.

[3] All averages in this report are simple averages, not weighted averages.

[6] The only tax-collecting supranational authority in the OECD area is the European Union (EU). Customs duties collected by EU member states on behalf of the EU are reported at this level.

[7] Only four of the countries analyzed are also European Union member states and therefore subject to a supranational authority.