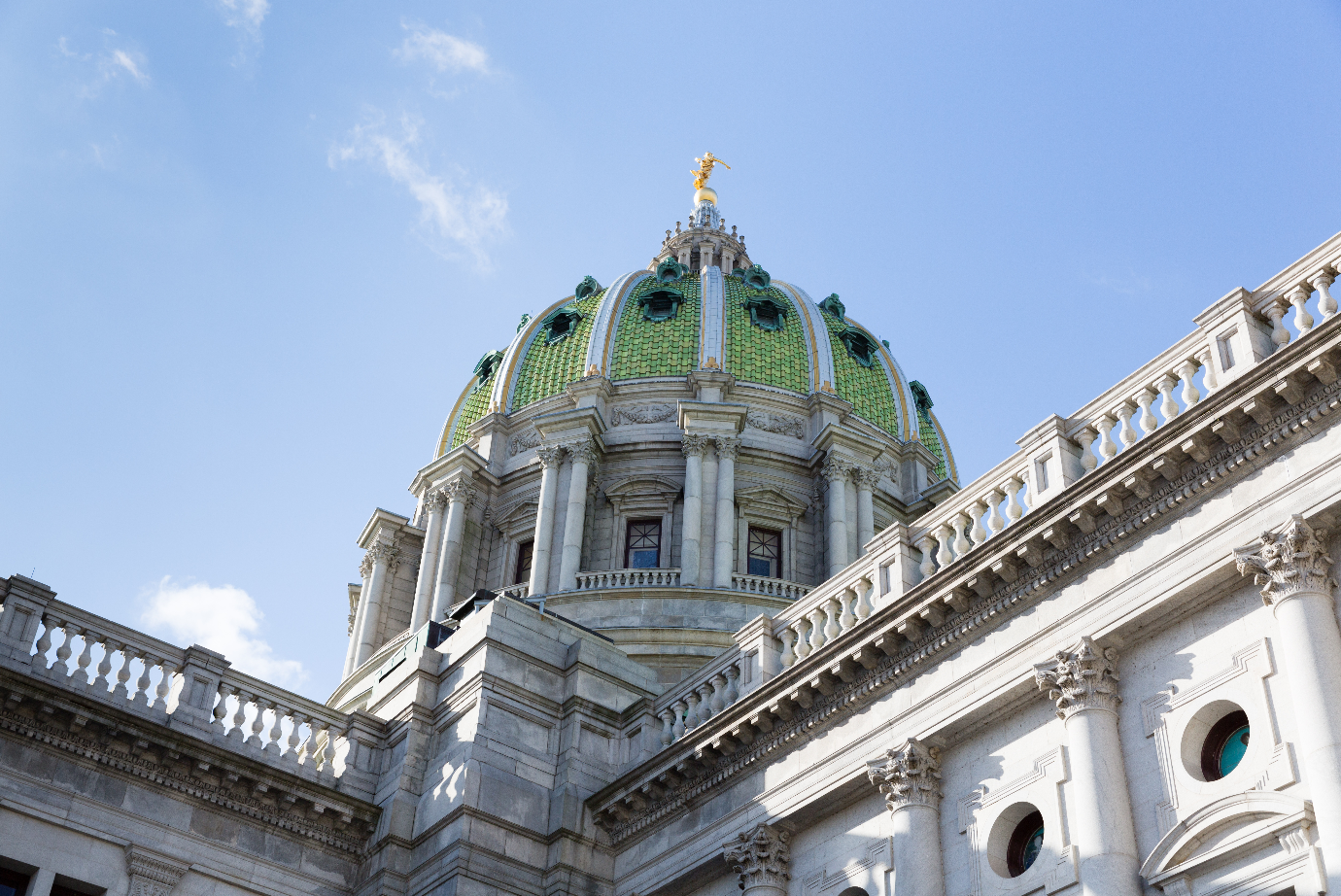 Under the budget introduced by Pennsylvania Gov. Tom Wolf (D), taxes would go up more than $6 billion per year, with additional revenue from both individual and corporate income taxes. The state’s flat personal income tax rate would increase by 46 percent, partially offset by an outsized increase in the poverty credit, which would see a family of four eligible for partial relief due to poverty until they reached $100,000 in taxable income—four times the poverty line. Even after implementation of the higher rate, the personal income tax would be low (4.49 percent), but the rate is deceptive, particularly for small business owners, given the extremely peculiar way that Pennsylvania taxes income. It would also yield flat-rate income taxes in excess of 8 percent in at least three jurisdictions, led by Philadelphia at 8.37 percent.

The governor’s proposal would also reduce the state’s anomalously high corporate income tax rate, long a bipartisan priority, paid for by the adoption of combined reporting. Curiously, however, while the rate would ultimately be scheduled to decline from 9.99 to 5.99 percent, the initial rate cut is only to 8.99 percent, even though the pay-for is fully implemented at that time. If the proposal is to trade combined reporting for a more competitive rate, why fully implement combined reporting in 2022 but wait until 2026 to implement the promised rate reduction?

This dramatic proposed tax increase is not a response to the pandemic. Pennsylvania’s tax collections only declined 1.2 percent ($429 million) from 2019 to 2020, and general fund revenues were very nearly flat (a loss of $68 million, or 0.2 percent). After taking federal transfers into account, Pennsylvania’s budget actually grew in 2020. This isn’t patching a budget hole; it is intended to raise an additional $6.3 billion a year tax increase, using the governor’s figures. (House Republicans estimate that the figure is closer to $7 billion per year, though this figure may be initial collections exclusive of refunds.)

Pennsylvania’s constitution requires that taxes be imposed uniformly, which prohibits the state from adopting a graduated-rate income tax and has been understood to preclude such provisions as a standard deduction. However, policymakers have been able to get away with modest adjustments, including, for decades, a poverty credit designed to reduce or eliminate liability for the lowest income taxpayers. Currently, an unmarried taxpayer has no liability if their income is lower than $6,500, and the benefit of the credit phases out by the time they reach $9,000 in income. For married taxpayers, the full benefit is available through $13,000 in income, with an additional $9,500 allowance for each child.

A married family with two children, therefore, currently has no liability in Pennsylvania if their income is below $32,000, though the benefit quickly phases out, and they get no benefit of it at all above $34,250 in income. The credit works by offsetting a certain percentage of tax liability: 100 percent under the threshold, reduced by 10 percent for every $250 in additional income. For a single filer, therefore, 100 percent of tax liability is abated at $6,500 in taxable income, then 90 percent at $6,750, and 50 percent at $7,750, down to 10 percent at $8,750, before the benefit is eliminated at $9,000.

Under Governor Wolf’s proposal, the fully excluded amounts would rise to $15,000 for single filers and $30,000 for married couples, plus $10,000 per dependent. Even more significantly, however, instead of the credit’s value declining by 10 percent for every $250, it would only decline by 1 percent for every $500 in additional income. Previously, a married couple with two children would see the credit go from fully available at or under $32,000 to fully phased out at $34,250. Under Wolf’s proposal, that same couple would see the benefit phase out between $50,000 and $100,000 of income, with a family of four entitled to fill out paperwork claiming a poverty credit with as much as $99,999 in taxable income. This certainly violates the spirit, and quite possibly the letter, of the uniformity clause in the Commonwealth’s constitution.

Even though Pennsylvania’s individual income tax is low at 3.07 percent, and would remain low at 4.49 percent, the Commonwealth is unique in establishing eight classes of income and not allowing taxpayers to apply losses in one class against gains in another, or to carry losses from one spouse to another on a joint return. Imagine, for instance, that a Pennsylvania resident quits her job to open her own business. Before she quits, she has earned $80,000 in taxable wages that year, but her new business isn’t profitable yet, and she posts $20,000 in losses. In any other states, the $20,000 in business losses would offset the $80,000 in wages, yielding $60,000 in taxable income. In Pennsylvania, taxable income would be $80,000, because the business losses cannot offset losses from compensation. Other classes of income include interest, dividends, and income from the sale of property.

Crucially, the business owner is also prohibited from carrying losses into future years, so not only does that $20,000 business loss not offset wages in the current year, but it cannot be deducted from business gains in a future year, either. And even in a situation where spouses had offsetting gains and losses in the same income class, and the couple files jointly, these gains and losses cannot offset.

The rate, therefore, may seem low—but Pennsylvania’s anomalous income tax structure creates a base that is potentially much broader than actual net income. To this, Governor Wolf proposes a 46 percent rate increase, from 3.07 to 4.49 percent. This would undermine regional competitiveness, with the average effective rate on income in the state exceeding neighboring Ohio’s, and the impact on small businesses in particular could be substantial.

Pennsylvania, moreover, has more local income taxes than the rest of the country combined. Local income taxes in Pennsylvania are only imposed on earned income, but the average effective rate on that income is 1.76 percent, bringing the average combined rate to 6.25 percent. Earned income taxes can be imposed by both municipal governments and school districts, though in most cases, they have a combined cap, and there may be sharing requirements within that cap. Pennsylvania’s average rate would be higher than combined state-local flat rate income tax rates in all but four municipalities nationwide, led by Detroit.

In Philadelphia, a rate of 3.88 percent would yield an 8.37 percent flat income tax rate, a higher flat income tax rate than currently exists anywhere in the country. In Chester and Reading, the rates would reach 8.24 and 8.09 percent, respectively, while Scranton’s combined rate would be 7.89 percent. Pittsburgh’s flat rate would be 7.49 percent. Each of these is higher than any combined state and local flat-rate tax rate anywhere in the country at present. Very few places would be spared; while it seems almost reasonable compared to rates in Philadelphia, Pittsburgh, or certain other cities, those living in, say, Allentown might find it getting hard to stay at a flat rate of 6.47 percent, nearly matching Detroit rates.

With the Commonwealth’s finances largely in order, such rates may prove hard to justify. For Pennsylvania’s small businesses, still struggling due to the pandemic, they could be devastating.