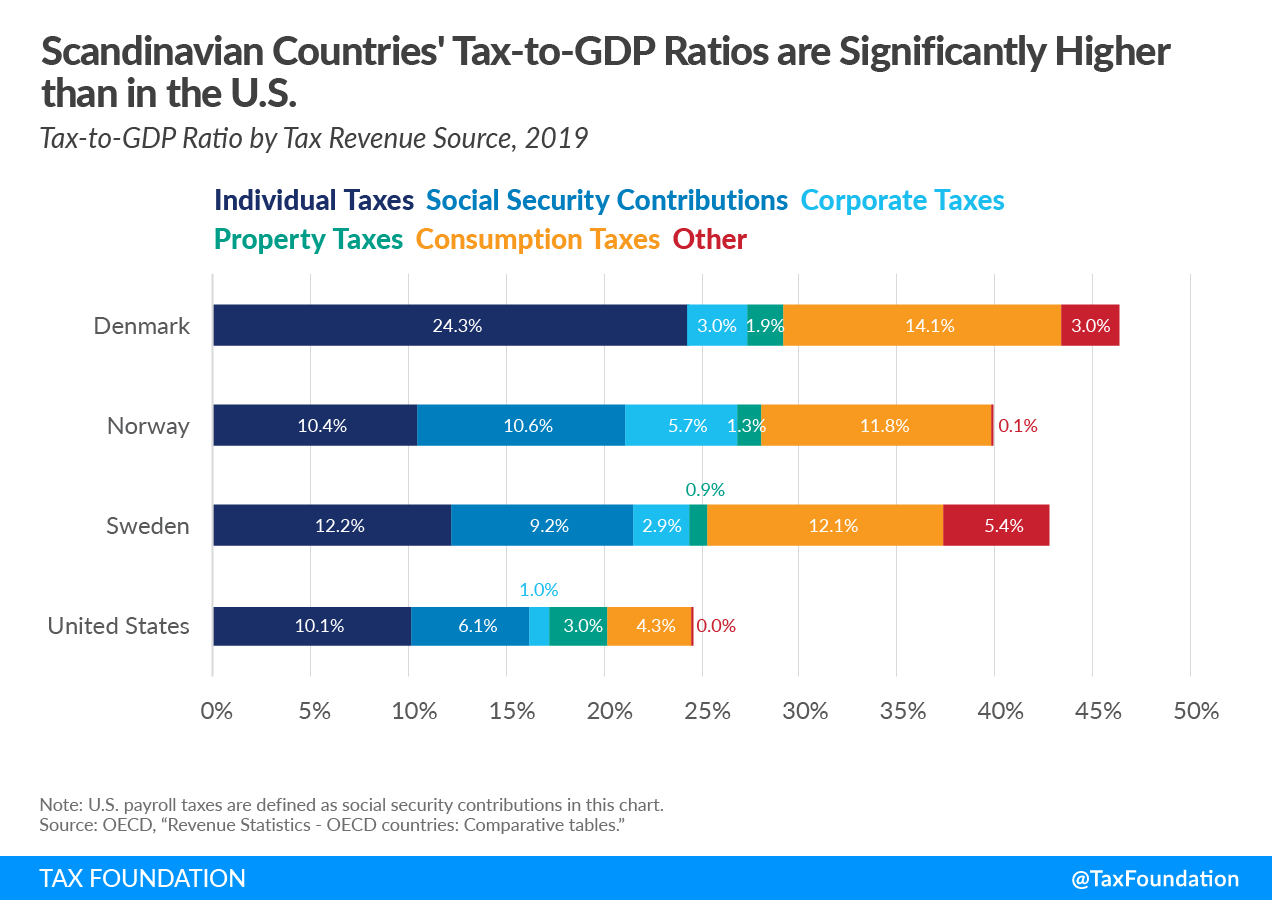 Scandinavian countries are well-known for their broad social safety net and their public funding of services such as universal health care, higher education, parental leave, and child and elderly care. High levels of public spending naturally require high levels of taxation. In 2019, Denmark’s tax-to-GDP ratio was at 46.3 percent, Norway’s at 39.9 percent, and Sweden’s at 42.8 percent. This compares to a ratio of 24.5 percent in the United States.

So how do Scandinavian countries raise their tax revenues? A first breakdown shows that consumption taxes and social security contributions—both taxes with a very broad base—raise much of the additional revenue needed to fund their large-scale public programs.

One way to analyze the level of taxation on wage income is to look at the so-called “tax wedge,” which shows the difference between an employer’s cost of an employee and the employee’s net disposable income.

In 2019, the tax wedge for a single worker with no children earning a nation’s average wage was 35.6 percent in Denmark, 35.7 percent in Norway, and 42.7 percent in Sweden. Although Denmark and Norway are below the OECD average of 36.0 percent, their tax wedges—as well as Sweden’s—are higher than the U.S. tax wedge of 29.8 percent. 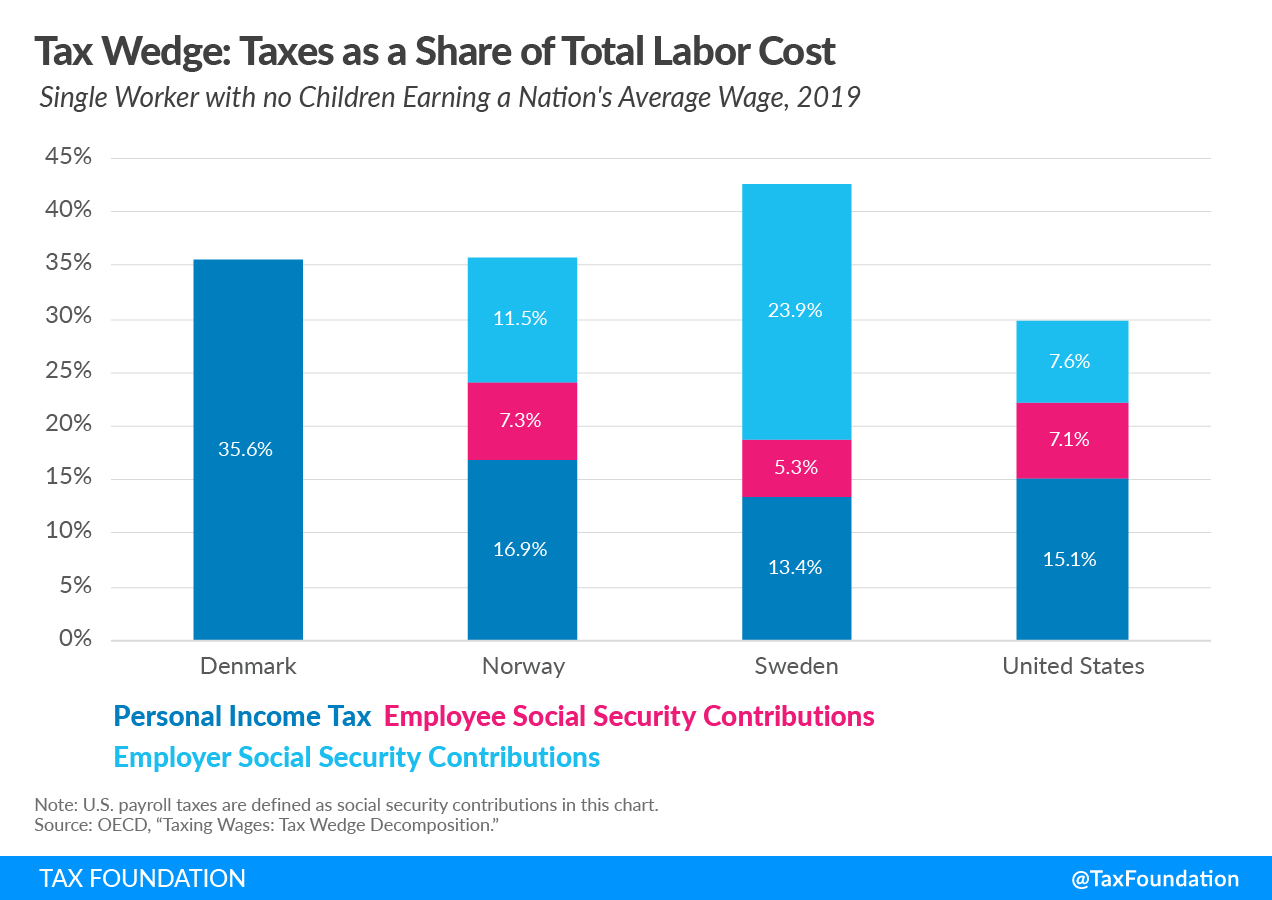 In Norway and Sweden social security contributions—employer and employee side combined—account for 18.8 percent and 29.2 percent of total labor costs of a single worker with no children earning an average wage, respectively. This compares to 14.7 percent in the U.S.

Only Denmark does not impose social security contributions to fund its social programs. Instead, it uses a share of its individual income tax revenue for these programs. 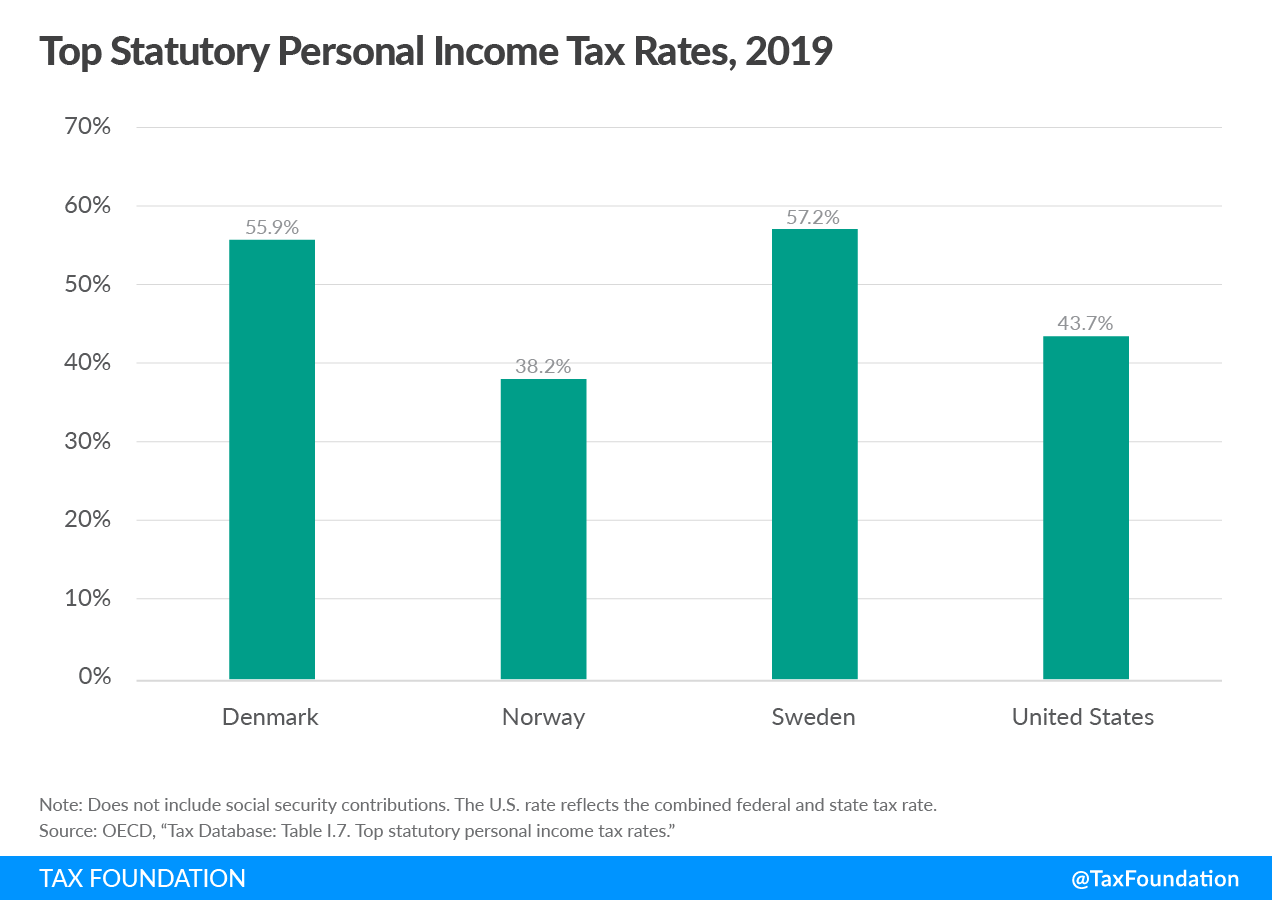 However, tax rates are not necessarily the most revealing feature of Scandinavian income tax systems. In fact, the United States’ top personal income tax rate is higher than Norway’s top rate, at 43.7 percent (federal and state combined).

Scandinavian countries tend to levy top personal income tax rates on (upper) middle-class earners, not just high-income taxpayers. For example, in Denmark the top statutory personal income tax rate of 55.9 percent applies to all income over 1.3 times the average income. From a U.S. perspective, this means that all income over $70,000 (1.3 times the average U.S. income of about $55,000) would be taxed at 55.9 percent.

In comparison, the United States levies its top personal income tax rate of 43.7 percent (federal and state combined) at 9.2 times the average U.S. income (at around $500,000). Thus, a comparatively smaller share of taxpayers faces the top rate. 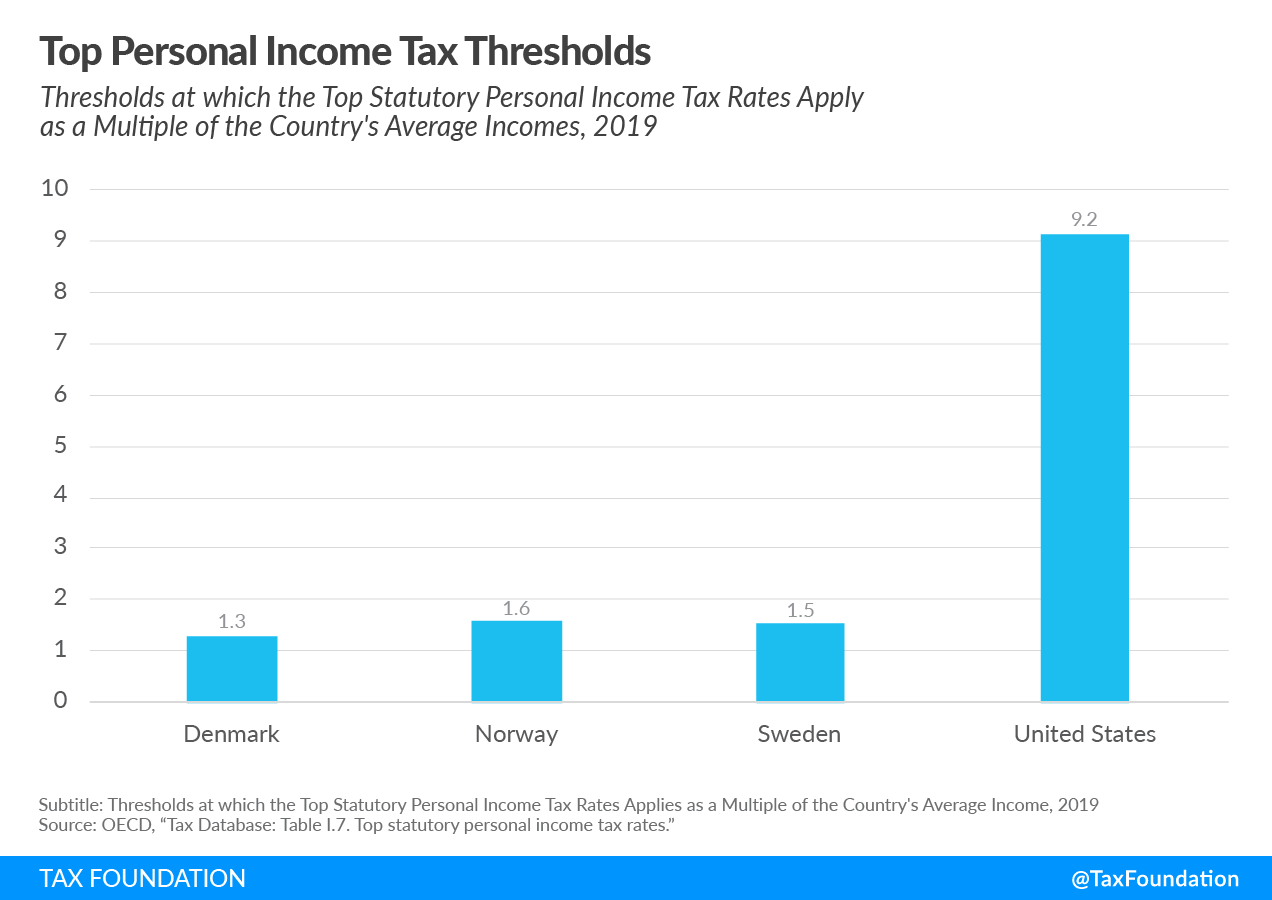 Importantly, the overall progressivity of an income tax depends on the structure of all tax brackets, exemptions, and deductions, not only on the top rate and its threshold. In addition, the amount of tax revenue raised given a certain tax system depends on the distribution of taxable income.

In addition to income taxes and social security contributions, all Scandinavian countries collect a significant amount of revenue from Value-Added Taxes (VATs). VATs are similar to sales taxes in that they aim to tax consumption. However, the VAT is assessed on the value added in each production stage of a good or service rather than only on the final sales price.

As a tax on consumption, VATs are economically efficient: they can raise significant revenue with relatively little harm to the economy. However, depending on the structure, a VAT can be a regressive tax because it falls more on those that consume a larger share of their income, which tend to be lower-income earners.

In 2019, Denmark collected about 9.4 percent of GDP through the VAT, Norway 8.6 percent, and Sweden 9.2 percent. All three countries have VAT rates of 25 percent. The United States does not have a national sales tax or VAT. Instead, there are state and local sales taxes. The average tax rate across the country (weighted by population) is about 7.4 percent. Due to the much lower rate, combined with a narrower base, U.S. sales taxes collect only about 2 percent of GDP in revenue.

While Scandinavian countries raise significant amounts of tax revenue from individuals through the income tax, social security contributions, and the VAT, corporate income taxes—as in the United States—play a less important role in terms of revenue.

The taxation of capital gains and dividends in Scandinavian countries is similar to the United States, with the exception of Denmark. Denmark’s top tax rate on dividends and capital gains is among the highest in the OECD, at 42 percent.

Scandinavian countries provide a broader scope of public services—such as universal health care and higher education—than the United States. However, such programs necessitate higher levels of taxation, which is reflected in Scandinavia’s relatively high tax-to-GDP ratios.

Adopting such public services in the United States would naturally require higher levels of taxation. If the U.S. were to raise taxes in a way that mirrors Scandinavian countries, taxes—especially on the middle class—would increase through a new VAT and higher social security contributions. Business and capital taxes would not necessarily need to be increased if policymakers were following the Scandinavian model.

It does not come as a surprise that taxes in Scandinavian countries are structured this way. In order to raise a significant amount of revenue, the tax base needs to be broad. This means higher taxes on consumption through the VAT and higher taxes on middle-income taxpayers through higher social security contributions. Business taxes are a less reliable source of revenue (unless your country is situated on top of oil). In short, Scandinavian countries focus taxation on labor and consumption.