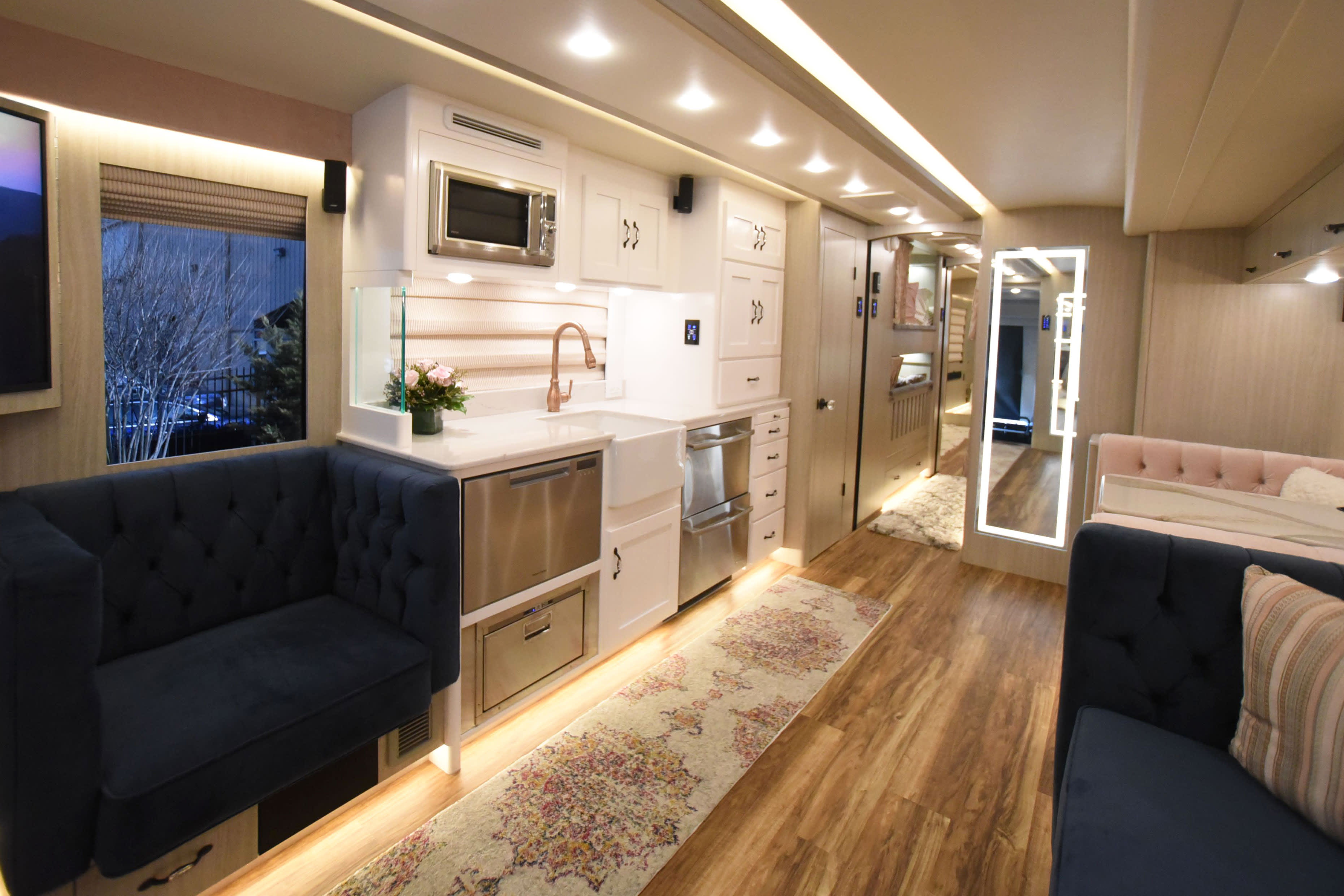 The Hemphill Brothers Coach Company knows a thing or two about how celebrities live on the road. The Nashville-based RV company, run by brothers Joey and Trent Hemphill, has been building and outfitting luxury tour buses for 40 years, touting an A-list client roster ranging from mega stars like Taylor Swift, Oprah, Dolly Parton and Beyonce to former U.S. presidents.

“2020 was going to be our best year yet. It was already booked as our biggest year in the history of our company,” said Trent Hemphill, when CNBC first caught up with Hemphill back in October.

But when the coronavirus pandemic led to abrupt concert cancellations across the country in early March 2020, $30 million dollars in booked RV rentals for musicians on tour went out the door with them. “My brother and I, we’ve been through a lot of things together in this business, but nothing like this,” Trent Hemphill said.

Data from the American Bus Association estimates that between 75%-80% decrease of tour bus trips have been cancelled since mid-March 2020 due to the pandemic, a nearly $5 billion dollar loss for the U.S. entertainment coach industry, which includes motor-coach operators and tour companies.

The Hemphills grew up touring as a successful family gospel group before borrowing money from their dad in 1980 to buy their first bus to rent out. Now, they have over 100 buses. The Hemphill Brothers Coach Company is located in Nashville, Tenn.

Brothers Joey and Trent Hemphill got into the RV business in 1980 with just one bus. Their Nashville-based fleet now includes more than 100 coaches and over 200 employees and boasts a long list of A-list celebrity clients.

During the first five months of 2019, business was booming: 95% of the Hemphill fleet were on the open road. But in early 2020, “not a single RV left the lot for three months,” said Joey Hemphill. “We were deemed essential transportation for the government. But there was no business to be had.”

“The most painful thing we’ve ever had to do was lay off employees. We had to be very nimble and cut costs immediately and figure out a path through this so that we get to the other side,” he added.

So the brothers put their heads together and decided to do something they’d never done before: Create a social media presence and begin marketing their buses to the masses.

“We deal with tour managers. Dealing with the general public is something we’ve never done in our 40 years. So it was all new to us,” said Joey Hemphill.

“We said, our equipment can be used by the general public that doesn’t even know we exist. We just got to get the message out there,” added Trent Hemphill.

To drum up buzz, the brothers came up with phrase “travel like a rockstar” to market their luxe RVs to American tourists and travelers who were seeking an alternative to air travel during the pandemic.

“It was a way for us to not only generate revenue for the company, but for our employees and drivers as well,” said Trent Hemphill. The “rockstar experience” went viral — and the Hemphills said they’ve completed dozens of tourist road trip rentals last year and into 2021.

The buses are a lot like being in a rolling a five-star hotel and riders can choose from between multiple floor plans. The “star bus” can sleep up to 12 people and even pets, and each part of the bus can be closed off for privacy. The brothers said that every bus is “extremely customized” and “no two buses are the same.”

The Hemphill Brothers’ celebrity RVs are outfitted in top-of-the-line materials and trimmings like genuine leather, hardwood flooring, granite, marble and quartz. The elaborate buses cater to luxury travelers who seek the ultimate comfort on the road.

In true celebrity fashion, Hemphill buses offer travelers a ride in the lap of luxury: Every RV is outfitted in upscale finishes, including genuine leather, hardwood flooring, granite, marble and quartz.

Cost to rent the campers start at $1,200-$1,500 dollars a day depending on mileage. Drivers, fuel and incidentals are included, and drivers can meet travelers at their homes anywhere in the continental U.S.

Trent Hemphill said the benefits of traveling on the road versus a plane are plentiful. “You only have to pack once,” and passengers wake up at their next destination in the morning while the bus travels overnight,” he added. “Our drivers are so good at giving you such a smooth ride. You don’t even know you’re moving.”

“I personally sleep better on a bus than at home,” said Joey Hemphill.

So who else has slept in a Hemphill bus? The same company that made superstar Taylor Swift’s first tour bus crafted country legend Merle Haggard’s last.

The coach buses are sterilized before every trip and drivers are Covid tested before any trip and stay in pre-arranged lodgings between destinations. Prices can vary based on an individual’s schedule and itinerary, or travelers can choose to have a trip route tailor-made for them.

The Calderon family said when their South Africa trip was derailed due to the pandemic, renting a Hemphill bus for the same amount of money and going on a cross-country road tour was one of the best decisions they’ve ever made.

“We’ve been all over the world and we’ve had some amazing vacations. I think we had no idea that we would come back and say of all of the trips that we’ve taken in our lifetimes, that this was our favorite,” said Karla Calderon.

Karla, her husband Rafael, and their two young children took their Hemphill bus out west for a 12-day trip, starting in Nashville and ending in Yosemite National Park. “We always want to travel outside the U.S. and see all these things. This [trip] reminded me that this country is incredible,” said Rafael Calderon.

The Hemphill Brothers said they have also increased other revenue streams by selling used equipment and doing custom interior modifications and conversions for outside clients. The company said that this has helped to offset a portion of the loss of rental revenue during the pandemic and has allowed them to bring employees back to work.

Even when live concerts return, the Hemphills said they plan to keep a portion of their fleet for tourists.

“We hit a storm and we had to take control again of the company. And we realized that we can still do it.” said Trent Hemphill. “It’s been a challenge, but it’s also been invigorating a little bit for he and I to, to see that the decisions we make on a daily basis can affect the outcome of our business. Just like they did in the beginning. It makes you feel young again.”